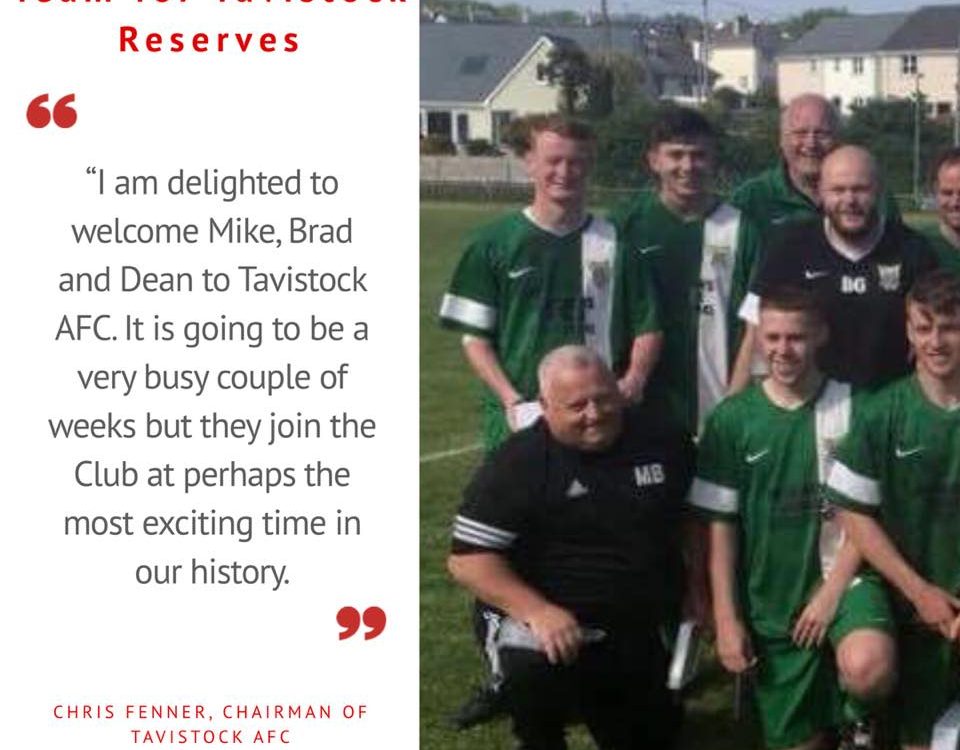 Management team appointed for Lambs Reserves It is with great pleasure that we announce the appointment of a new management team for our Reserves.

Welcoming to Tavistock Association Football Club, we wish to introduce joint managers Mike Bridgeman and Brad Gargett, who join us from the First Team at Lakeside Athletic. They will be assisted by Dean Roberts as coach, who will work with the Club’s Strength and Conditioning Coach, Pete Bruce.

With just under a month until the 2018/19 season starts for our East Cornwall Premier League (ECPL) side, the trio are going to have their work cut out for them as they aim to get the team ready in time. However, the managers are optimistic at the potential the players have and for the season ahead.

“I worked with Brad last season at Lakeside and we had a very successful season,” explains Mike, who has been involved in team management for 23 years, winning numerous cups and league trophies with Plymouth and district clubs. “When the opportunity came up to manage at such a great club like Tavistock, we could not turn it down.

“We like the club ethos of bringing the youth through and we are hoping to make good progress in nurturing the young lads into the first team.

“We have already been made to feel at home by those we have met at the club and look forward to working to achieve everyone’s goal at Tavistock, to improve every year and to grow as a team.”

Brad, who has been involved in coaching and managing for around six years, adds: “During my four seasons at Lakeside the team had a successful time, gaining three consecutive promotions, winning two league titles including a undefeated season, two challenge bowls and the ECPL Swaz Teamwear Cup.

“I’m delighted to have been offered the chance to be part of a great club. Mike and I had a fantastic season last year and I’m looking forward to working with him again.

“The set up and attitude towards football and youth development at Tavistock is fantastic. We can’t wait to get started and be part of that.”

Chairman of TAFC, Chris Fenner, welcomed the new arrivals: “I am delighted to welcome Mike, Brad and Dean to Tavistock AFC. It is going to be a very busy couple of weeks, as they pull together a squad from last year’s Reserves, the Community Under 18s and players they have worked with at Lakeside, but they join Tavistock AFC at perhaps the most exciting time in our history and I believe the challenge will be highly motivating for all concerned.

“Mike, Brad and Dean bring with them a great deal of recent success and a can-do attitude, as well as a passion for promoting youth, so I feel confident that they will work very well with Stu and Ken, our First Team Managers and Pete, the Club’s S&C Coach, in delivering two competitive and attractive footballing sides at Tavistock and continuing the progress we have made as a Club over the past few seasons. Good luck to them all.”

Chris also gave thanks to Ged King and Jeff Spear, last year’s management team, who joined the club at the beginning of the 2017/18 season: “From our first conversations with Ged and Jeff they have been a delight to work with. Often under difficult circumstances, especially at the back end of last season when having to play four times a week for weeks on end, they dug deep, encouraging their players to step up to the Firsts when invited, and even continuing to support the Club throughout this pre-season as we have looked for their successors.

“Whilst we will have undoubtedly lost some of their talented squad to teams playing at a higher level, we believe that the foundations that Ged and Jeff have laid at Tavistock will support the development of our next generation of young footballers, including the recent graduates from our Tavistock Community Under 18s side.

“These players, who seek to make our super Club part of their footballing journey, can take inspiration from their peers, many brought to us by Ged and Jeff, who have already served their apprenticeship at ECPL and become members of this season’s senior SWPL Premier squad as we seek to secure promotion to the Western League.

“I would really like to take this opportunity, on behalf of the Club, to say thank you to Ged and Jeff for their input and support and to wish them well in whatever they do next. I would also like to extend our gratitude to their counterparts from the Tavistock Community Under 18s, Rob March and Adrian Towl, who like Ged and Jeff have encouraged their former players to embrace the opportunity of representing our two Tavistock senior sides in 2018/19, a number of whom played together last week against Plymouth Parkway and gave their experienced Western League opponents a serious run for their money.

“No doubt we will be seeing a lot of Ged, Jeff, Rob and Adrian over the coming season as they cheer on their former players at Langsford Park, along with the rest of us.”

The Reserves fixtures for the forthcoming season can be found here, with their first game to be played on Saturday 18 August away to Millbrook AFC.