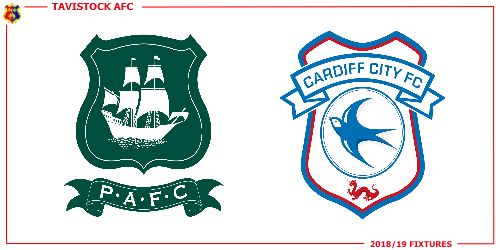 Tavistock’s big week of football The countdown has begun for the biggest week in the history of Tavistock AFC, when we host two professional clubs.

On Monday 16th July Manager Neil Warnock brings his Premiership Side to town, for the biggest game ever staged by the club. Kick off is at 7pm.

The Bluebirds gained promotion back to the Premier League under Neil Warnock, who now holds the record number of promotions gained in English Footbal, eight in total.

Warnock has been busy in the transfer market to add to his already very strong squad of players. Signing free scoring Bobby Reid from Bristol City, Warnock has also secured the services of Irish International Greg Cunningham. Josh Murphy has also joined the Bluebirds from Norwich City signing a four year contract.

The full squad will be coming to Langsford Park, local football fans have a great opportunity to see Premiership players play their local football team. It will be a great occasion for everyone concerned.

Lambs’ Manager Stuart Henderson said: ” I am absolutely delighted that Cardiff are coming to Langsford Park. This will be a massive test for the players to try and compete with top quality Premier League opposition.”

Two days before this, on Saturday 14th July, Plymouth Argyle visit Langsford Park with a 3pm Kick Off.

Manager Derek Adams has also been very busy in the transfer market, to build a team that is capable of gaining promotion to the Championship. They came so close last season just missing out on the play offs.

These with those who have stayed at the club, namely Lanaris, Grant, Wilde, Sarcevic, Ness, and Carey to name a few gives him a very good squad of players.

Manager Stuart Henderson said “This will be a great occasion for everyone concerned with Tavistock AFC and it’s a good opportunity for Argyle supporters to see the new players that Derek Adams has assembled for the 2018/19 season.”

Whilst kick off for the fixture is at 3pm, supporters will be welcome to come to Langsford Park from 11am, as we will be hosting the Green Taverners’ Fan Fest at Langsford Park. There will be lots of family fun, food and refreshment throughout the day and there will be entertainment from the Sensational Barnet Brothers.

We are also very pleased to announce that our Tavistock Legends will face Plymouth Argyle Vets in a match set to kick off at 11.30am.

Tickets for both games are now on sale. Prices for each game are £10.  Concessions £7.  Under sixteens £2.