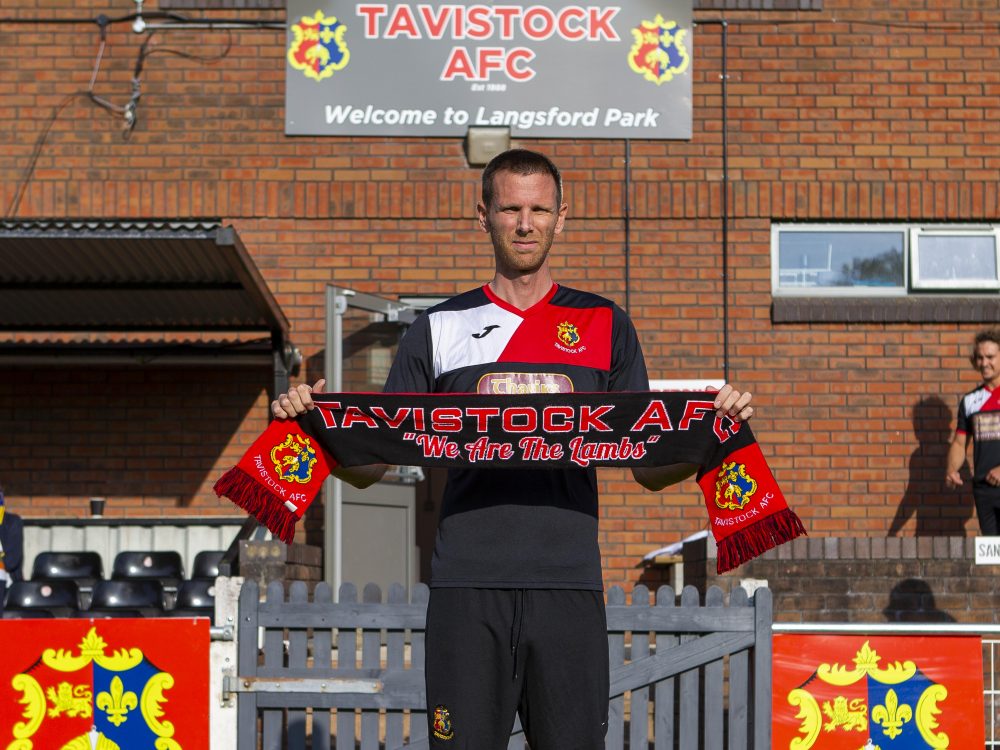 TAVISTOCK manager Stuart Henderson says he is looking forward to working with former England Under-21 international Calum Davenport after he became the club’s eighth summer signing.

Davenport is as experienced as they come having represented the likes of Coventry City, Tottenham Hotspur, West Ham United, Southampton, Norwich City, Watford and Sunderland and he will provide great experience to a relatively young Lambs squad.

Now 38, Davenport has not played for the last 18 months or so but he contacted Henderson and expressed a wish to get back playing again. He played in the recent 1-1 friendly draw against Plymouth Parkway and the manager had no hesitation in signing him up for our forthcoming Western League campaign.

CLICK HERE to get tickets for our clash with Plymouth Argyle

“Calum has obviously had a very good playing career and when I got alerted to the fact he could be interested in getting involved with us, we invited him down,” Henderson said.

“He came here to watch the Arsenal game and we had a good chat afterwards and I think he wants to give something back to the game.

“He has had an illustrious career and the fact he’s been in and around the Premier League for ten years, I think he will be a massive influence whether it is helping me and Ken or passing on knowledge to the youngsters.

“He still wants to play, but he will have a role in other areas as well and I am looking forward to working with him. The way he came across, it was all about giving back to the game, he lives in the Tavistock area and he knows we are trying to drag ourselves out of this Western League.

“We know that is going to be tough because a lot of other teams are trying to do the same as what we are but we feel that having someone like him, who is still as fit as a fiddle and who doesn’t carry any weight is going to be a valuable asset to us.

“I am certainly looking forward to having him as part of the squad and working alongside Ken and I and passing on the knowledge and experience that he’s picked up throughout his career.

“On the playing side, we have a lot of young lads, so if he plays at centre half and we have Ben Cross or Luis (Edmondson) playing alongside him, then it is only going to help them and they will only pick up things that will improve their game and improve the squad.”

Davenport came through the ranks at Coventry and was their young player and player of the year before a £1.3 million move to Spurs in August 2004. After 15 first team appearances and several loan spells, he joined West Ham for £3 million in January 2007.

A year later, he joined Watford on loan, but suffered a broken neck after a freak collision with Darius Henderson on his debut. He was released by the Hammers in March 2010 by mutual consent.

Davenport has international experience having represented the Three Lions at Under-17, Under-19 and Under-21 level. On joining the Lambs, Davenport said: “My only focus at the minute is to get fit again and see where that leads.

“I thank Stuart and everyone at Tavistock for the opportunity and I hope I can help the club achieve its goal of promotion from the Western League.”

Everyone at Langsford Park welcomes Calum to the club and we wish him every success in his time with the Lambs.

Meanwhile, the club can confirm that Alex Cairo has decided to leave Langsford Park and join South West Peninsula League side Bodmin Town.

We wish Alex well with his new venture.