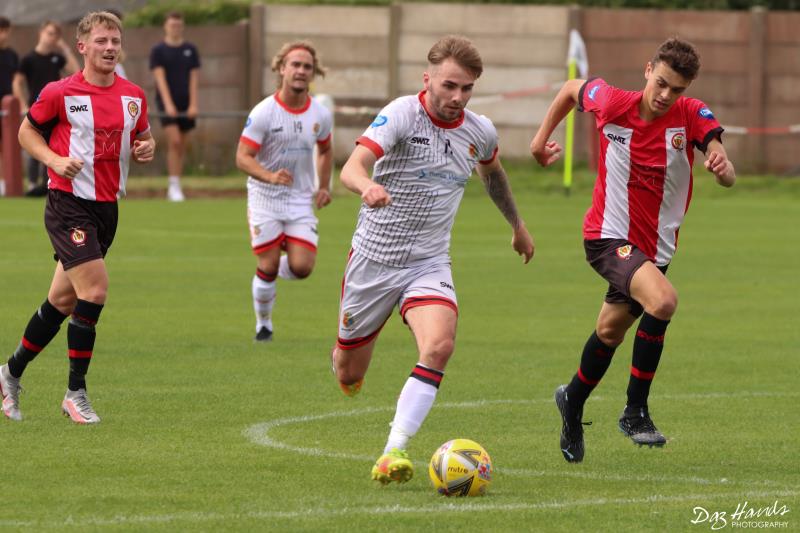 The Lambs got their 2021/22 Toolstation Western League campaign underway at Kimberley Stadium on Saturday, but it was not the start to the season we wanted as the team went down to a 2-0 defeat at Saltash United.

After a cagey first half of few clear cut chances, Stuart Henderson’s side stepped it up a notch after the break, but fell behind on 62 minutes when Callum O’Brien rose to head in a free kick from Jarrad Woods and the ball looped over the head of Tavi keeper Josh Oak and nestled in the far corner of the net.

Tavi were indebted to the excellent Oak for keeping the scoreline down as Saltash created other decent opportunities and the Lambs looked somewhat subdued in attack. They did finish strongly and twice had the ball in the back of the net, but on both occasions, Brad Austen was denied by a linesman’s flag.

The first of those certainly looked a close call, but the second did seem harsh with no Ashes defender appealing for offside. Austen had finished after a lovely flowing move down the left involving Josh Robins and Teigan Rosenquest, making his second ‘debut’ for the Lambs.

Tavi lined up with Oak in goal and a back four of Ben Cross, Warren Daw, Luis Edmondson and Robins. In midfield, Callum Watson and Dave Hallett were paired in the middle with Tallan Burns and Rosenquest on either wing. Luke Brown played off lone striker Mark Gusterson, who was registered from South West Peninsula League side St Blazey prior to the game with new signing Jason Vincent and fellow striker Josh Grant both unavailable.

Perhaps the biggest positive on the day, though, was the name of striker Liam Prynn amongst the Tavi substitutes. Prynny did not feature throughout pre-season and that lack of sharpness told at times, but with more game time, we all know what Prynny can bring to the team and his return will be a huge boost to the club.

“We are not completely sure what the situation is with Prynny,” Henderson said. “He has had a hectic time and just handed in his Masters, he has just moved, but he wants to get back into it, which is great.”

The Lambs have no time to feel sorry for themselves as they return to action on Tuesday night with a trip to north Devon, where newly-promoted Ilfracombe lie in wait. Kick-off is at 7.30pm.