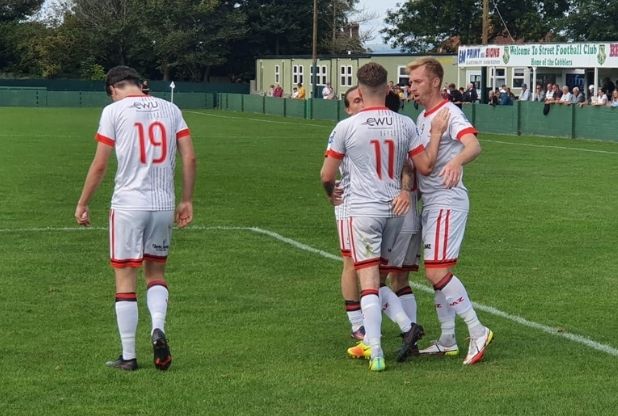 Tavi get back to winning ways with a superb 3-2 victory at Street Henderson pleased with a response, but knows Lambs can do better

LAMBS boss Stuart Henderson was delighted with the response from his players as they put Tuesday’s disappointing performance and defeat to Helston behind them with a superb 3-2 win at Street.

The scoreline perhaps does not reflect the nature of the game which saw Tavi dominate for long spells and create several chances but, after such a poor performance against the Cornish side, this was a welcome return to winning ways.

The boys certainly did it the hard way, though. Tavi fell behind when Josh Oak was penalised for tripping a Street player inside the penalty box and Harry Foster sent the goalkeeper the wrong way from the penalty spot.

The goal seemed to kick Tavi into life though. They created several chances to equalise, but it took until the stroke of half-time for them to eventually do so as Liam Prynn rose to head in a left-footed cross from Josh Parry from close range.

After the break, the Lambs took control as Warren daw headed in his third goal of the season from Dave Hallett’s pinpoint corner kick and the Josh Grant was on hand to tap in from close range after Daw had seen another goalbound header saved.

Street pulled a goal back, but ended the game with ten men when their number three was shown a straight red card for flooring Josh Robins. Despite some late pressure from the home side, the Lambs held on and had chances of their own to put the game beyond the home side.

“The first goal could have been avoided, it was a cross to the back stick and Ben (Cross) is under the ball, there is no information, so we have lost the first ball and lost the second ball.

“Then we go 3-1 up and the game is really won but, again, we just switched off and their chap has peeled off and won the header and won the second ball, so it is these little things.

“Seventy to 80-per-cent of what we do is good, but we have these sloppy moments. That said, I don’t want to be too criti9cal of the boys because it is a good three points away from home. But if we are to sustain a challenge, then we have to get those bits right.”

The goals for Prynn and Grant took them to ten and nine for the season, respectively, and Henderson had words of praise for his front men, especially Prynn, who he feels is showing a new side to his game.

“I think Liam Prynn has been excellent this season,” Henderson said. “I just said to him that everyone knows what a good footballer he is, but we are seeing a bit more of a physical side to him.

“He is playing with his back to goal as well as running the channels and I think he was my man of the match today.”

The Lambs are back in action on Tuesday night when they welcome Plymouth Argyle Under-18s to Langsford Park in a friendly.