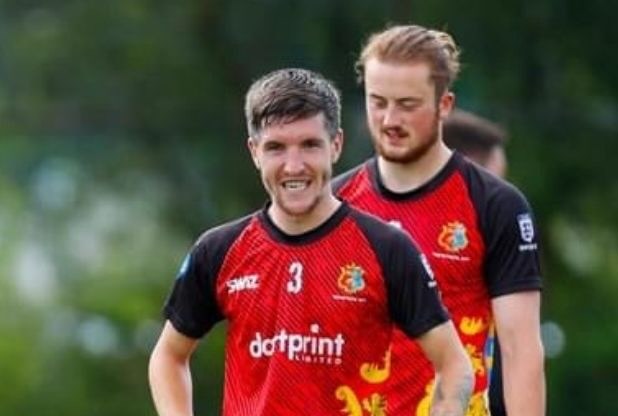 STUART Henderson knew that Tavistock would have to be at their very best if they were to get anything from their Toolstation Western League Premier Division trip to Helston Athletic on Saturday.

The Cornish side were 3-2 winners when the two sides met at Langsford Park earlier this season, but at Kelloway Park, the Lambs had to overcome a harsh red card to full-back Josh Robins to get anything from a feisty encounter. And they did just that by defiantly holding out to claim a deserved point in a goalless draw.

Robins, who’d moments earlier struck the crossbar with a stunning 30-yard half volley, was sent off after 25 minutes of the clash for a strong tackle on Helston’s Ryan Turner. But video highlights showed the left-back clearly got the ball first.

However, heavily influenced by the Helston players who were baying for Robins’ blood the red card was harshly brandished after referee Rowan Clarke had consulted his linesman.

After that, Tavi had their backs to their wall but, for all the possession they had, Helston rarely created a clear opening. When they did, Josh Oak made the necessarily saves and in front of him, captain Lewis Daw, brother Warren and Ben Cross were heroic in throwing their bodies in the way of anything and keeping Helston at bay.

There was even a ten-minute spell when the Lambs played with nine men after Warren Daw was sin binned for apparent back chat to the referee. But still Helston couldn’t break the Lambs down and if anything, it was Henderson’s men that came closest to winning the game in stoppage time, but Liam Prynn fired a free kick into the Helston wall.

Still, a point was no bad return at all against a side with a budget, bonuses and incentives on offer that most clubs at this level can only dream of.

“I thought we started the game well and were the better team for the first 20-25 minutes and we created a couple of half chances with Prynny and Dan Kiota up top and then there was the sending off, which I feel was very harsh,” Henderson said.

“You’d like to think the referee would use his common sense, but he hasn’t done and we were down to ten men against a good side and it was always going to be a battle.

“In the last 15 minutes of the first half, they were territorially on top and I couldn’t wait to get to half-0time, get into the players and decide what the shape would be and I thought we were absolutely outstanding in the second half.

“Apart from a tremendous save from Oaky, from distance, I don’t think they made the most of their extra man, they were crossing the ball from deep areas, Josh Oak plucked them out of the air and I thought Lew and Warren Daw were superb in dealing with Stu Bowker, I can’t remember Bowker having a shot on goal.

“To be fair to him, two or three weeks ago, he tore us apart, so I thought, defensively, we were excellent, we managed the game well and were dangerous on the break.

“We all got a bit excited with the free kick in the last minute because Prynny bent one in last week but it didn’t quite happen. But it’s a good point and with Bitton losing, we extended our lead at the top of the league.”

Bitton suffered a surprise 4-3 defeat at Saltash United and as a result of Buckland Athletic winning 3-1 at home to Millbrook, they drop to third in the table, with Buckland now second.