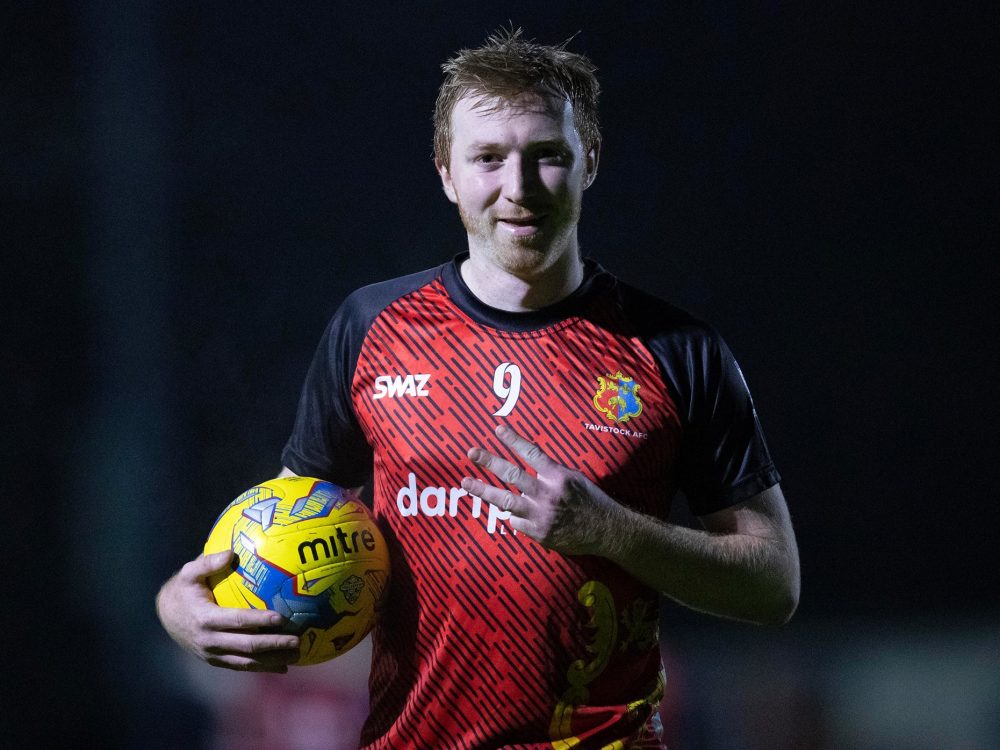 TAVISTOCK manager Stuart Henderson praised the response of his players as they turned on the style at Bridport with a devastating seven-goal blitz to return to the top of the Western League table.

The score was goalless at the break after a somewhat insipid display from the Lambs, but they were anything but after the break was they tore their opponents apart in emphatic style.

Luke Brown got the ball rolling and there were four goals from top scorer Liam Prynn before Josh Parry and Josh Grant, with a penalty, completed the scoring in a 7-0 romp against the league’s bottom side.

With Bitton and Helston Athletic sharing the spoils, it saw Henderson’s side return to the top of the table and he said: “I don’t know why, but we just took a while to get going.

“We didn’t have any temp in our game, everyone was taking an extra touch and the wingers were guilty of trying to beat the player all the time, rather than at times thread people in.

“I said at half-time that we had to move the ball quicker and to be fair, the first two goals were a carbon copy of each other, where we got in, and once we got the first two, the floodgates opened and it could have been more.

“We were playing fine in the first half, but it was too slow and like there was nothing on the game. The boys were going through the motions really and I said to them: ‘you can’t have that attitude, we are trying to get promoted.’

“It was a game we were expected to win, but there needed to be more urgency and desire. But the attitude was good in the second half.

“The attitude was good from everyone before the game and teams like that are always going to fight and fight and fight and slow the game down at every opportunity and try and nick a goal. I said as much as they want to slow it down, we have to speed it up and we do that by having less touches on the ball and moving it quickly. It was a good response from the boys, to be fair.”

Brown got the ball roiling with his first goal of the season before the outstanding Prynn bagged the next three including a sumptuous lob over the goalkeeper from 25 yards.

Parry added the fifth before Prynn’s fourth of the game made it 6-0 and Grant wrapped it up with the seventh from the penalty spot.

“Two of Prynny’s goals were exceptional, especially when he lobbed the keeper from 20-30 yards,” Henderson added. “He had a really good game, but that’s what we want from him and Granty. It’s all about confidence for goalscorers and they were both on the scoresheet again.

“Josh Parry was good second half, we was involved in some of the goals and scored himself, it was great to see Browny get one and Cory came in and was steady at left-back. He’s very calm on the ball and he suits our style of play which is one of the reasons why we signed him.”

Henderson added: “Two of the top teams (Bitton and Helston) have drawn, but it’s a long old season and we have a difficult run of games now, starting with a tough game at Bridgwater.

“With it being a Friday night game, I am sure there’ll have a big crowd in and if we can get anything from the game, then we’ll be pleased.”