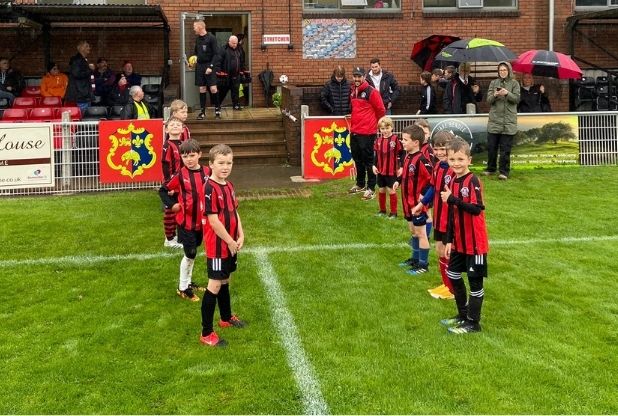 Singing in the rain! Under 7s mascots play their part in Tavistock’s win Huge thanks to TCFC Under 7s, who provided such great support

TAVISTOCK Football Club were delighted to welcome the Tavistock Community Football Club Under 7s team to Langsford Park on Saturday as our matchday mascots.

Despite a horrible day weather-wise, with torrential rain before, during and after Saturday’s match with Shepton Mallet, the young Lambs enjoyed the occasion and cheered every moment of our thrilling 5-3 victory.

The team were greeted by chairman Paul Stapleton, who gave each of the nine players a Tavistock AFC key ring, before they spent some time chatting with team manager Stuart Henderson.

The players then lined up to greet the players onto the pitch ahead of kick-off before taking their seat in the stands and cheering the team to victory – and our new position at the top of the Toolstation Western League Premier Division!

“The mascots were great, they gave us great support and when we scored, they were going crazy,” manager Stuart Henderson said. “It was a horrible day weather-wise, but they were really loving it and it was nice to have them, it’s what we want to see.

“We welcome kids and families – and the people of Tavistock – but especially the youngsters, as they are the future of the club. Hopefully, one day, they will be playing for the club because that is what we want.”

Tavistock Community FC’s Under 7s are managed by Pete Williams and has a squad of nine players – Reggie, Charlie, Ben, George, Joseph, William, Oliver, Ollie and Tommy. They have won both of their two league matches so far this season, but saw Saturday’s match postponed, due to the awful weather.

Speaking of their Langsford Park experience, TCFC Under 7s manager Pete said: “The Under 7s really enjoyed the match day experience, making a tunnel at the start and clapping both teams onto the pitch.

“They then enjoyed watching an action-packed game full of goals – even a beautiful technical backheel – two penalties and a game where Tavi ended not only victorious, but top of the league as well.

“The weather for the first half was awful, but it didn’t dampen their spirits and after the game, the young Lambs fist bumped the victorious older Lambs and smiles and spirits were high all round.

“A big thank you to the first team for embracing us as they did and putting on such a show.”

If anyone wishes to be a matchday mascot, or if your team would like to be mascots for the day, then please contact commercial@tavistockfc.com.