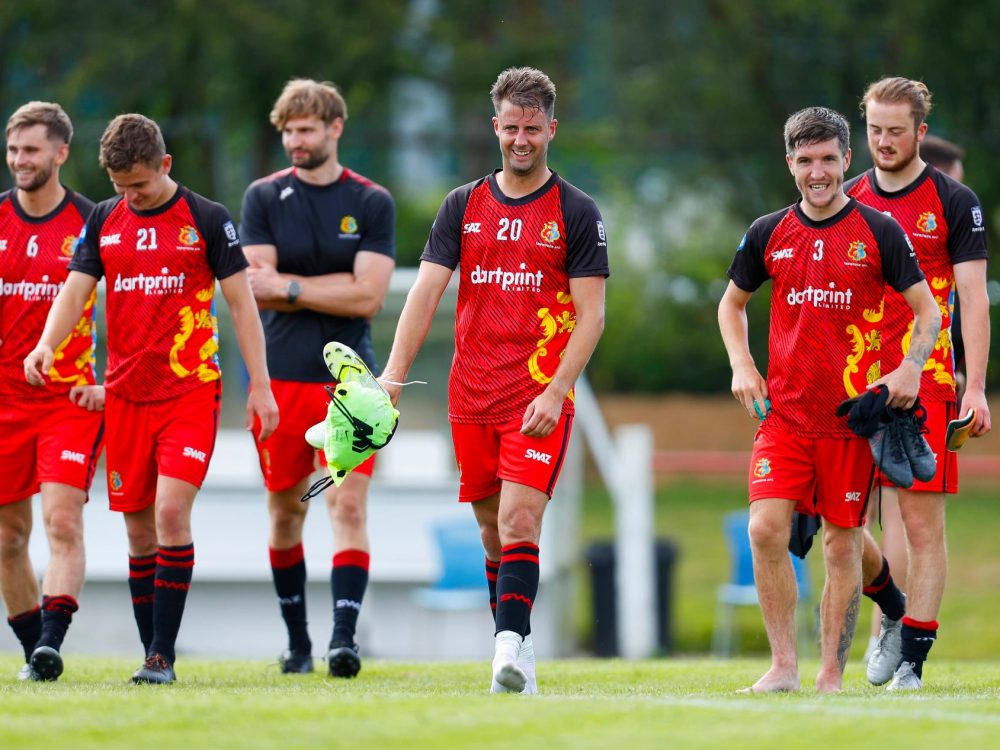 Tavistock feeling supersonic ahead of trip to Bridport An oasis of football and music? Stu's Lambs are mad for it!

SOME might say that Tavistock are overachieving right now. The Lambs endured a slow start to the season but, little by little, they have worked their way to the top of the Western League Premier Division table where they will hope to stay with a win at rock-bottom Bridport on Saturday.

Given the poor form of tomorrow’s opponents, it is unlikely the Lambs will let things slide away now, while the art of picking up league points is all part of Stuart Henderson’s grand master plan after challenging his side to be top at Christmas and see how things transpire in the New Year.

Naturally, Henderson won’t want his side to fade away in the title race – even if they were knocked off top spot in midweek following Bitton’s home win over Shepton Mallet – but that will cast no shadow over what the lads from Langsford Park have achieved in recent weeks to get themselves into the thick of the title race.

“It’s a very topsy-turvy league this season,” Henderson said. “You look at Bitton who are top again now, and they lost to Brislington, who lost 11-0 to Exmouth last week, were hammered 8-0 at home by Saltash and lost 7-0 at Bridgwater, so it’s mad to think they can go and beat a top of the table team.

“I don’t recall a season where it goes down to goal difference, it is all about winning games and if we go to Bridport and win 1-0 or 2-0, I will be delighted.

“People have to realise that Bridport will be fighting for their lives and as the season goes on, and they are down at the bottom of the league, they’ll be wanting to get out of it, no doubt.

“As much as we want to rotate the squad, obviously the priority is getting three points and we have to be mindful it is not going to be easy and no game is at this level. If you go into it with the wrong mentality, that is normally when you come unstuck.”

Whatever the outcome of tomorrow’s game, the Tavi squad are planning a social event in the evening, starting with the bus journey home, where even the quiet ones and those married with children will temporarily turn songbird or rock and roll star and be initiated into the Tavi family.

“The team is very much together and has been for the five or six seasons me and Ken have been at the club,” Henderson added. “The boys enjoy each other’s company, we gave them a week off this week and we have a nice coach booked for Saturday, so we will go up there, play the game and hopefully get the right result and have a good night out afterwards.

“It’s good for them all to mix and I am looking forward to a few initiations on the bus coming back, that’s for sure!”

That, of course, is just the nature of reality for a non-league club where initiations will live forever. Do you know what I mean?

Tavi are awaiting the outcome of an appeal over the red card shown to left-back Josh Robins in last week’s goalless draw at Helston Athletic, but it’s one where Henderson may have to acquiesce the final ruling of the Devon FA, if the appeal is futile.

“I’d like to think we will get it overturned because the video evidence shows he clearly won the ball,” Henderson said. “His trailing leg has come through, but I can’t see there being any intent, so we will wait and see and hope he will be with us on Saturday.”

“We were all shocked and their players – like they did all game – tried to influence the referee, but we brought Cory (Sargent) on and he did very well.

“On the ball he is very comfortable, he has a nice touch and is calm in possession, he probably just needs to get a bit tighter to players and stuff like that, but it’s an encouraging start, for sure. But he’s young and that will only come with age and experience.”

Robins’ availability is definitely maybe right now, but if the appeal is unsuccessful, Tavi will just have to roll with it and make do without the full-back for their next three matches.