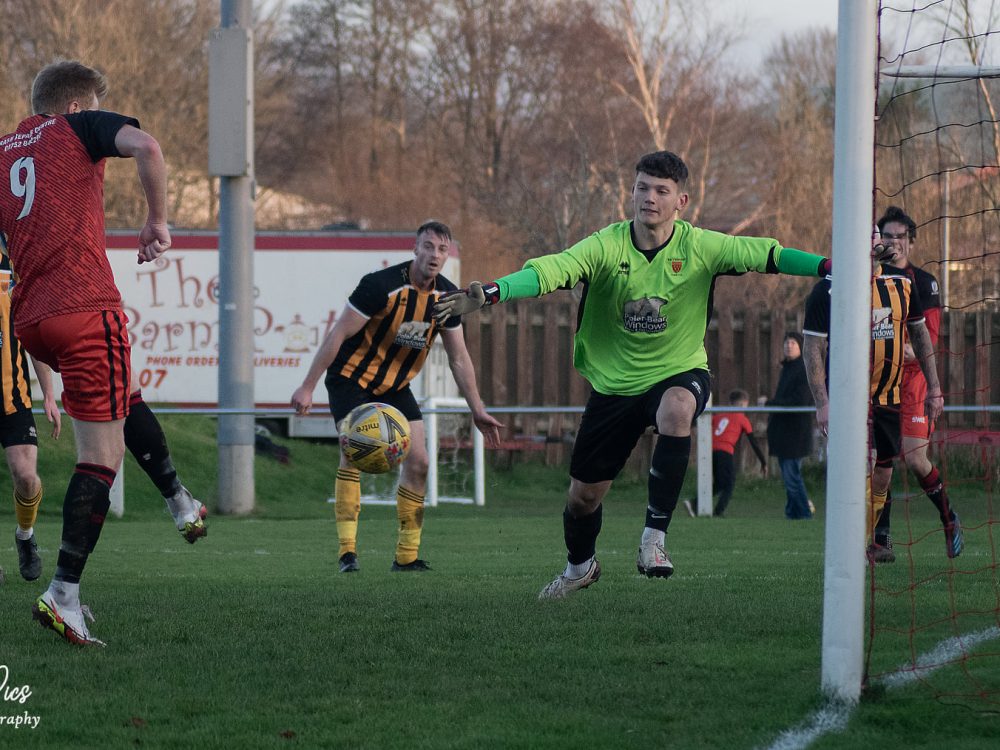 ACE marksman Liam Prynn took is tally for the season to 30 with a four-goal blast in Tavistock’s 6-0 thrashing of Keynsham Town on Saturday.

The win made it an impressive 13 games unbeaten for Stuart Henderson’s side, who are now ten points clear at the top of the Toolstation Western League Premier Division table following weekend defeats for Bitton and Helston Athletic.

Mousehole are now up to third place after their 6-2 thrashing of Street and can overtake Tavi at the top but, as Henderson said, the Lambs can only take care of themselves.

“Mousehole are flying and they can go a point above us if they win their game in hand, but there is also Helston, Bitton, Bridgwater and Exmouth – a lot of teams in it still, but we can only worry about ourselves,” Henderson said.

“If there is a lockdown around the corner, then I think we are in pole position and we just have to try and make sure our form is as good as it can be over the remaining 14 games.”

The Lambs made a perfect start with a goal inside two minutes and one coming form an unlikely source. Several players had an attempt to convert from a corner kick, which Keynsham failed to clear, and eventually, Ben Cross guided a shot across goal and into the corner for his first goal of the season.

The Lambs were always in control and rarely troubled, despite not being at their most fluent best. However, Prynn made it 2-0 when he converted a simple tap-in after good work by Josh Parry on the left.

Henderson was not best pleased with his team come half-time, but in stepping it up a gear after the break, they tore Keynsham apart. The outstanding Dan Koita crossed for Prynn to plant a fantastic header past the keeper and then completed his hat-trick when he latched onto Callum Watson’s superb ball, rounded the goalkeeper and scored from an acute angle.

Prynn then added his fourth and Tavi’s fifth, after being picked out by birthday boy Josh Grant and that proved to be his final act as he was then replaced by CJ Pritchard. The young substitute wasted no time in getting in on the action as he beautifully controlled a pass before curling the ball into the corner with his first touch to complete a good day’s work for the Lambs.

“I didn’t think we were great in the first half, but second half, we were a lot better,” Henderson added. “It was 6-0 and I don’t remember them having too many chances, so you have to be happy with that and it sets us up nicely going into Christmas.”

For Prynn, it is now an incredible 30 goals for the season, in just 26 matches. His 27 league goals make him the division’s top goalscorer, three ahead of Dean Griffiths at Bitton.

“I’m doing alright, just taking each game as it comes,” he said. “Another four today so I am very happy. I was on 26 before today and it was a questionable goal towards the end, but I’ll take 30 for the season now.”

Asked if he had a target for the season, Prynn laughed and said: “I’ll keep that for myself! I do have a target… it’s a few more yet.”

The former Aston Villa and Torquay United youngster added: “We got there in the end. It was 6-0 and a convincing performance really.

“In the first half, the way we were playing wasn’t how we wanted to play and I think, if you’d paid £6 to come and watch, you are thinking: ‘why have I paid my money here?’

“We have to get the balance right between being tough on yourself and setting high standards, but I think Stu has that balance right. We need to go on and win games convincingly but sometimes, you are not always going to be 100 per-cent.

“I think we have that balance right and we are setting high standards.”

The Lambs were cheered on by Tavistock Community Football Club’s Under 10s team, who thoroughly enjoyed their day and provided plenty of vocal encouragement during the game.