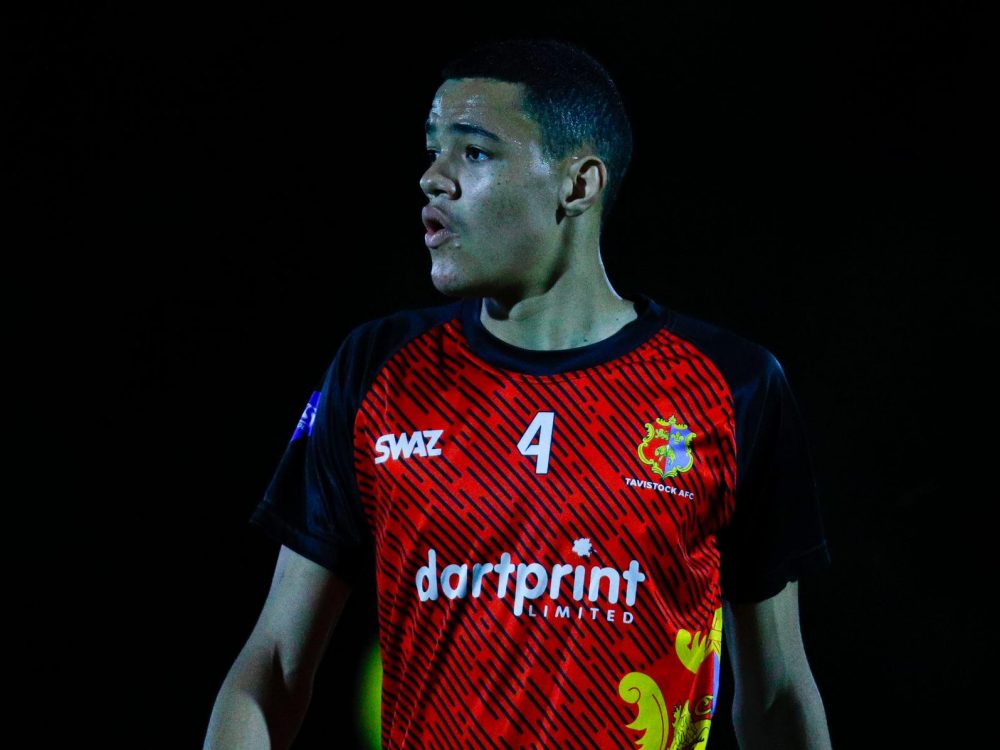 TWO goals by replacement striker Dan Koita helped Tavistock extend their lead at the top of the Toolstation Western League Premier Division to 13 points with a 3-0 Devon Derby win over Buckland Athletic at Langsford Park.

Koita was given a rare start as a centre forward after the Lambs’ 30-goal top goalscorer Liam Prynn missed the game through injury, and he showed his instinctive qualities with the opening two goals against a well-beaten Buckland side.

The first came on 14 minutes when he was superbly played in by Josh Grant. Buckland were appealing for an offside but Koita timed his run perfectly before showing good feet and seeing his shot loop into the air and into the net off the goalkeeper.

The second and third goals came within 60 seconds of each other. Koita bagged his and Tavistock’s second when Buckland were again appealing for an offside – and to be fair, Josh Grant was – but Koita timed his run perfectly to latch onto Josh Parry’s pass before rounding the goalkeeper to score.

A minute later, it was 3-0 as Jake Miller picked out the marauding Iestyn Harris, bursting down the right and the youngster saw his cross deflect into his own goal by Frazer Clarke.

The match was attended by Neil Warnock, who was in the region for Christmas and handed the man of the match award to Josh Robins – who also won the £200 monthly 200 Club prize – at full-time.

“It was a clean sheet, we had a great togetherness,” Henderson said. “I wouldn’t say it was a vintage performance, but it was certainly a good enough performance and the three points are everything.

“We had a lot of chances in the first half an hour and I think we were 3-0 up after 25 minutes, or something like that. Dan Koita got two of the goals and I am not sure who got the other one, but we had other chances as well.

“The game was won at half-time as we were 3-0 up, but it’s one of those where if they do score the next goal, it makes it a different game. But the game management was good and I only really remember them having one chance and that was Levi (Landricombe) but he didn’t hit the target.

“They had one in the first half as well, but they were always going to create some chances. All in all, I felt we managed the game well.”

Buckland certainly had opportunities to score, but this Lambs defence are a tough nut to crack and made it a fifth clean sheet in a row in the league.

“We said at half-time not to concede and to build on that momentum and that is what we have been looking for and that’s what we got today,” Henderson said.

“I did think, at times, players were guilty of taking too many touches, but I thought Barry Jackson did great, he was working on the pitch on Christmas Day and again first thing this morning and the pitch played well and although it was soft, it was good enough to play on.”

The win means the Lambs are now 13 points clear at the top of the table, although all the teams around them have games in hand. However, only Mousehole – if they win all five of their games in hand – can overtake Tavi at the top.