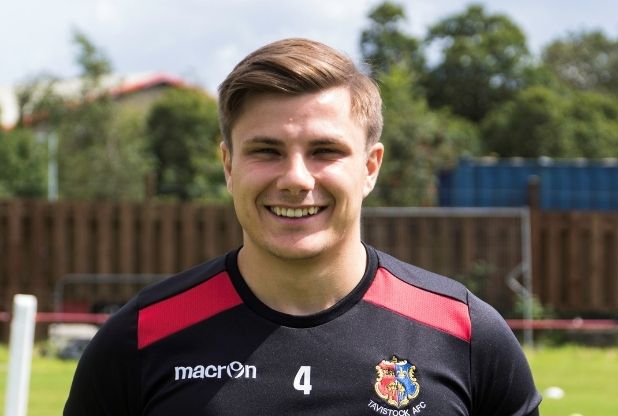 Welcome back Dan! Evans on the bench for Lambs Defender set to feature for the first time in two years

IT has been a long time since Dan Evans last kicked a ball in anger for Tavistock. But on Saturday, the gifted defender is set to make his first appearance for two years when the table-topping Lambs play host to Ashton & Backwell at Langsford Park.

Evans had been troubled by an ankle injury when things reached a tipping point whilst warming-up before a 1-0 win at Bridport in January 11, 2020. He needed a routine operation to clear it up, but with the initial break out of coronavirus just a month or so later, and the subsequent pressure on the NHS leading to routine operations being cancelled, Evans’ need for surgery was delayed.

The truth is that Evans’ injury was nothing too sinister, but it was serious enough to require an operation. That has now happened and after working hard to regain his fitness, the former Swindon Town youngster is in a position now where he can be considered for selection.

“Dan has been training and obviously, with Lewis (Daw) away, it allows us to put him on the bench as defensive cover,” Lambs boss Stuart Henderson said.

“I think, ideally, he will go out and get a couple of games elsewhere over the next few weeks, but he is certainly there or thereabouts now. We have the game against Crediton coming up, which he will get minutes in, and I am sure he will feature in the run-in for us.

“The operation was reasonably minor and I understand he had the bone shaved because it was pinching down on his ligaments, if I remember rightly. That might not be the right medical term, but it was along those lines and because of Covid, he had to wait ages for an operation and then after having the operation, he’s had to do the rehab as well.

“In between that, he and his partner have had a baby so, for a variety of reasons, we haven’t seen him for two years and he was – and will be – a key player for us. He is one of the best centre halves this side of Bristol playing at non-League level and it is a great coup to get Dan fit and a good addition to the squad.”

Evans certainly faces a fight for a first team shirt, though, with the Daw brothers, Lewis and Warren, and Ben Cross in outstanding form right now. Lewis misses Saturday’s game as he is on a stag do, while Cross is arguably the unsung hero of Tavistock’s season, excelling at centre back and right-back this campaign.

“No, not at all and Dan wouldn’t expect that,” Henderson added. “He needs to go and get match fit and we have Ben Cross that has almost converted himself to a centre half. Ben plays both positions (centre back and right-back) really well but he enjoys centre back so, all of a sudden, we have a lot of competition there, which gives me a headache, but that’s what we want.

“We want everyone to be keen and hungry and that’s why we will have to rotate the squad – to ensure everyone feels involved as we try and chase down promotion.”

It is four months now since Tavi tasted defeat and the lads have built up a 13-point lead at the top of the Premier Division table. “For us now, it is all about winning games of football,” Henderson added.

“We want to do it in an attractive manner that we normally do, but that is not always possible. The boys need to find ways to win games of football – that’s what it’s all about now.

“It’s disappointing I am not going to be there myself, but they are all big games and we don’t want any slip-ups and to hand the advantage to the teams around us. The boys go into the games with a bit of pressure on them, but it’s important they handle that pressure and be focused on the common aim that we’ve got.”

Elsewhere this weekend, Saltash United can do the Lambs a big favour when they play host to second-placed Bridgwater United at Kimberley Stadium.

Mousehole have five games in hand on Tavistock and are the only team that can overtake us at the top and they head to Clevedon Town.

Helston will look to put a New Year’s Day defeat at Buckland behind them when they host Wellington, while the Bucks head to Bitton looking to build on that win.

But Langsford Park is where it’s at! kick-off is at 3pm.