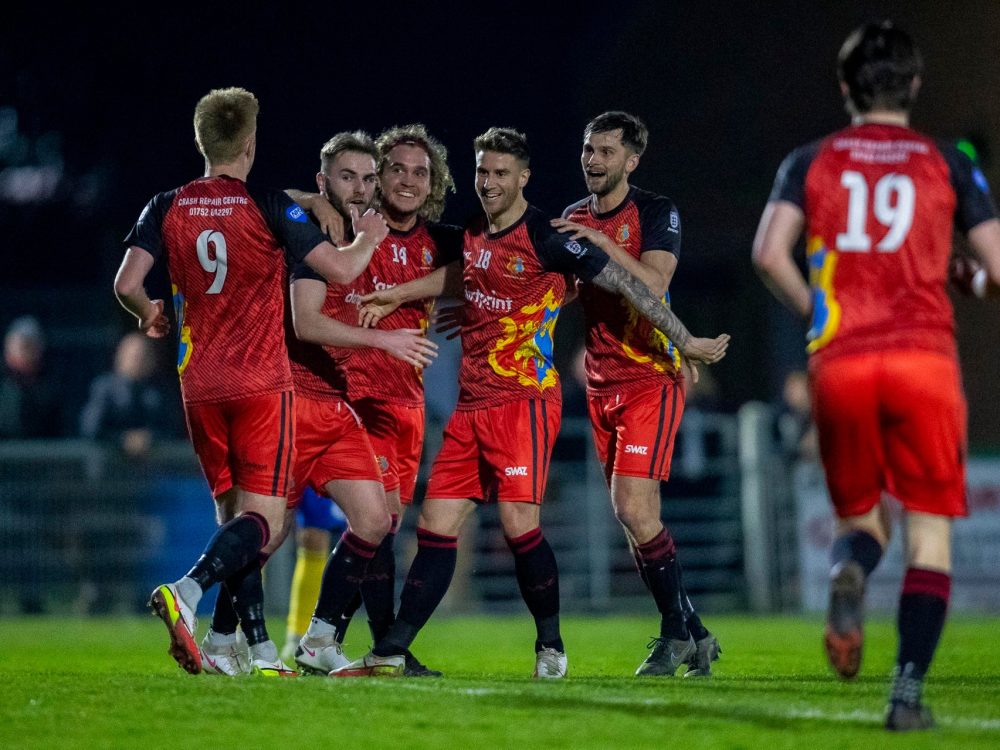 TAVISTOCK manager Stuart Henderson could not hide his delight after watching his side turn in one of their best performances this season to beat Clevedon Town 4-1 and extend their lead at the top of the Western League Premier Division.

After losing top sport to Exmouth recently, Tavi regained it with a hard-fought 1-0 win at Brislington on Saturday, while Exmouth and fellow challengers Mousehole drew 0-0. Mousehole then drew 0-0 at Helston Athletic, but after Tavi’s thumping win over Clevedon, they were four points clear of their fellow contenders.

Much of the damage was done in a blistering start to the match when goals from Josh Parry, Liam Prynn and Josh Grant gave them a 3-0 lead inside the opening 18 minutes. Clevedon pulled one back and were physical throughout, but Parry’s second in the second half made it a good night’s work for the Lambs.

“I am really pleased,” Henderson said. “They have been on a fantastic run and we scored three early goals, but it didn’t really feel like that, the game felt more 50/50, but we took our chances well.

“I thought we were really good and made really good decisions. The energy in the side was just what me, Ken (Ord) and Cal (Davenport) had asked for. We looked really solid, although I was a bit disappointed with the goal that they scored.

“But second half we were solid and I can’t remember them creating too much. I thought they were quite aggressive and you were wincing at some of the challenges going in, but they are a good side, they are very together and you can see why they have lost one in 21, or whatever it is. That’s a hell of a record and they are a proper team.”

Parry opened the scoring in somewhat fortuitous circumstances when his cross with the outside of his right foot looped over the goalkeeper and found the far corner, before Prynn bundled the ball home from a Tavi corner.

Parry was instrumental in the third goal, leading a counter-attack and feeding Prynn, whose deep cross found Tegan Rosenquest, His shot was saved, but Grant was on hand to tap in the rebound with just 18 minutes on the clock.

Clevedon pulled one back soon after, but Parry completed the scoring with his second of the game, finishing from close range after good work and a perfect cross from Prynn to set Tavi up nicely for their huge cross-Tamar derby with Saltash United under the Langsford Park lights on Friday night.

“Dane was out here watching and they are absolutely flying, so I am expecting another tough game,” Henderson said. “We have given ourselves half a chance and that’s all we can do.

“We know that our performances a few weeks ago weren’t what they needed to be, but tonight is arguably one of our best performances of the season and I hope that gives the lads a lot of confidence.

“Hopefully we get a big crowd in on Friday, Saltash is only down the road, so I am sure a lot of their fans will want to come up and watch. It is two good sides, like I said, Dane has done a great job there and they will be bang up for it and we are as well and I think anything we take off them – one point or three- will be a great result.”