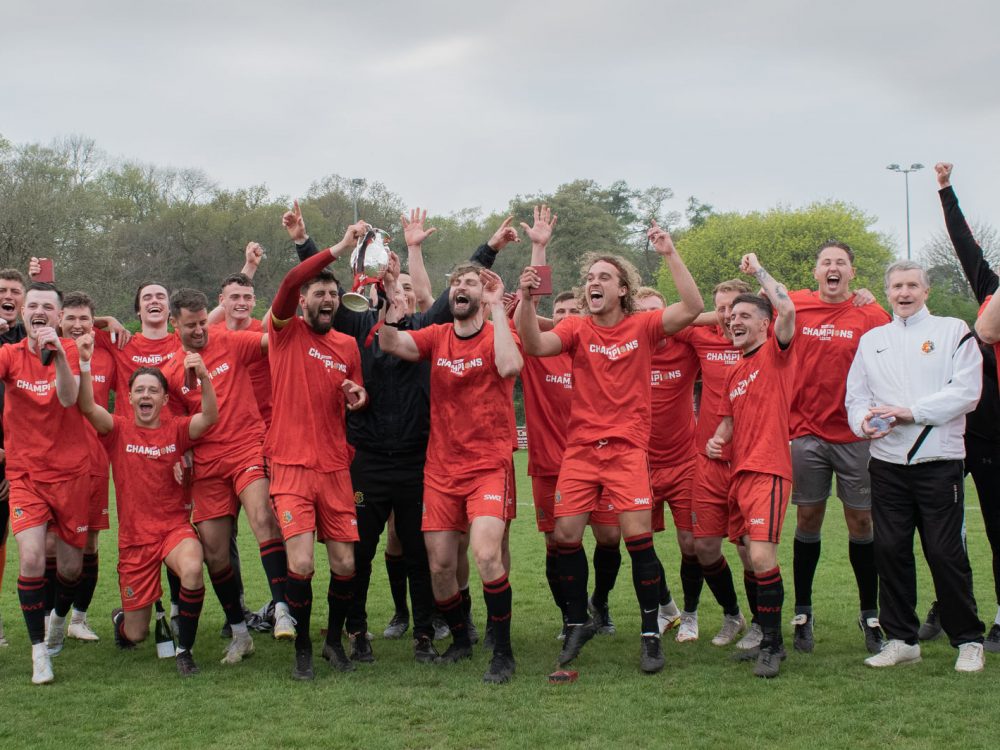 FOR the first time in the club’s 134-year history, Tavistock AFC will be playing Step Four football next season after a dramatic 1-0 win over Ashton & Backwell on the final day of the season earned them promotion – and the Toolstation Western league Premier Division championship.

Going into the game, the Lambs were level on points with Exmouth Town and had the slenderest of goal difference advantages of just one goal after Exmouth had beaten Tavi 1-0 in the week to draw level on points at the top of the table.

As Saturday’s final round of fixtures headed into stoppage time, both teams were being held to goalless draws before Warren Daw was adjudged to have been fouled inside the penalty box and the Lambs were awarded a dramatic spot kick.

Up stepped top scorer Liam Prynn, after a lengthy delay caused by the Ashton & Backwell players, to score and seal the three points for Stuart Henderson’s side. The final whistle then blew at Shepton Mallet, which saw Exmouth claim a point from a goalless draw meaning that the Lambs ended up winning the division by two points.

“I’ve said it many times before, we were up there with Parkway in the last two years which were cut short and when they went up and they didn’t, we felt hard done by, especially as we thought it was two clubs that would get promoted,” Henderson said.

“The lads have stuck at it, everyone was writing us off in pre-season when it was a struggle just to get a team out in some pre-season games because of Covid and injuries and losing the likes of Aaron Bentley, Jack Crago, Tyler Elliot and then Matty Andrew.

“We had a difficult start to the season but, once we settled, we went on a 22-match unbeaten run after losing at home to Helston and that was the platform really to make the promotion push. 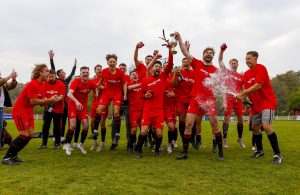 “I think we have been the outstanding team in the division and have led the table for five months. Fair play to Exmouth, they put in a late charge and their form over the last two or three months has been brilliant as well, but we won our last ten home games on the trot and, at any level, that is a great record.”

Despite dominating for large parts of the game against Ashton & Backwell, who belied their second from bottom position, it looked like that run of home wins would come to an end before the late drama.

“It was nervy, it was in our hands provided we won and we knew that we’d be up (on points per game) even if we won and Exmouth scored a cricket score. But we bettered their result and won the league by two points,” Henderson added. 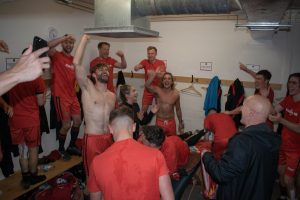 “We will enjoy the next few weeks and the team and staff are off to Ibiza for a week to celebrate but, off the pitch, the club really has to step up because we know that Southern League football is a big step up for us.

“The cub were nervous about going into the Western League and now we are going a step further, so it is going to be a big ask for people behind the scenes.”

The club are seeking additional sponsorship to help cover the cost of promotion to a higher division, but with almost 400 Tavi supporters in attendance at Langsford Park on Saturday, it goes to show that there is plenty of interest in the football club.