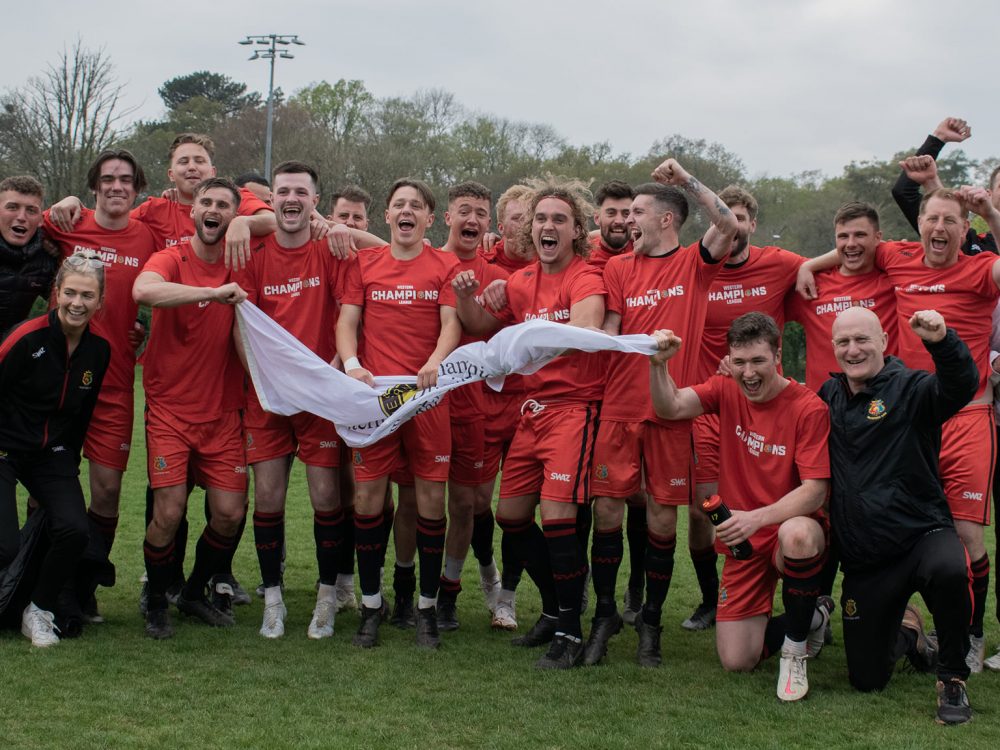 TAVISTOCK manager Stuart Henderson will give all of his squad the chance to test themselves in the Southern League after confirming there will be no departures from Langsford Park this summer.

The Lambs will be playing in Division One South for the first time in their history after being crowned champions of the Toolstation Western League Premier Division, pipping Exmouth Town to the title on the final day of the season with a 1-0 win over Ashton & Backwell, courtesy of Liam Prynn’s stoppage time penalty.

Prynn, who finished the season as the league’s top scorer with 35 goals, is one of many players that attracted interest from elsewhere since the season finished, but Henderson has managed to keep his squad together as the Lambs prepare for life at Step Four of the National Game System.

“We are a close bunch on and off the pitch and all the boys have been on the journey together,” Henderson said. “Naturally, there is speculation that X, Y and Z are leaving, but I knew straight away that all the boys wanted to stay and here we are looking forward to challenging ourselves in a higher league which I am sure will be very competitive.

“I think the lads deserve the chance to test themselves. I have always been loyal to the players and they have been loyal to me, so it works both ways.

“We have played a lot of these teams in cup competitions and we have always fared alright. Don’t get me wrong, it’ll be very different over a campaign and there will be adjustments with the extra travel and various demands that the league will put on us, but we embrace that challenge and we are really looking forward to it.”

The fact that every player has decided to stay – especially those being chased by other cubs – is testament to them and the culture created at Langsford Park. It would be easy for several players to leave and earn more money elsewhere, but the team spirit and enjoyment factor of playing for the Lambs is second to none.

“We have improved their deals, but not dramatically, and it is recognition for the boys in general that they are playing in a higher league and there will be more demands on them,” Henderson added.

“It is natural that they should have increases but seven or eight of the players could have played at a lower level for more money, but that’s not what we are all about. We try and be the best we can at the best level we can and the boys have that mentality as well.

“That’s what I am about when I bring players to the club – they have to fit that personality and be motivated for football reasons and not financial reasons.”

The Lambs are certainly a progressive club and have announced plans for a development side from the start of next season, where they hope to work with local clubs to give players the opportunity to train with them and be readied for Southern League football, whilst continuing their playing development on weekends at local clubs in Devon and Cornwall.

On top of that, the club are also keen to work closely with local professional clubs such as Plymouth Argyle and Exeter City and offer them the chance to take players on loan and gain experience of men’s football in the Southern League.

“We took Harry Lee from Exeter last season and (Argyle’s) Phil Stokes kindly offered us one or two players, although we didn’t take up that option as we didn’t need to as we had good player availability at the time,” Henderson added.

“It looks like we have two coming in from Exeter and hopefully we can get some from Argyle or other clubs as well because with the level that we are playing at now, it will be massive to tap into that.”

With confirmation of the squad for next season, the club are now able to offer sponsorship opportunities for each player for the 2022/23 season. Current player sponsors will have until June 15 to continue their sponsorship of their respective player.