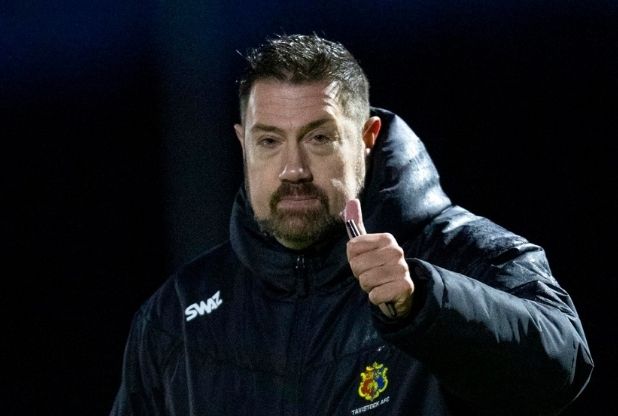 WESTERN League champions Tavistock took on South West Peninsula League West winners Falmouth Town at Langsford Park in their first pre-season game of the summer and the Lambs’ class told with an emphatic 5-0 victory.
New signing Adam MacPherson led the way with a brilliant hat-trick, while there were also goals for Josh Grant and another new signing, Ed Harrison, as Tavi made light work of their Cornish visitors.
“We had a few trialists, four or five players were away including Evo (Dan Evans) who is away on holiday and (Liam) Prynny, who is not very well and the two Daw’s (Lewis and Warren) were away at a concert, but the lads that have come in have done really well,” Lambs boss Stuart Henderson said.
“Falmouth have won the South West League twice, quite comfortably, but I did think there was quite a difference in levels between the two sides. Apart from a 10-15 minute spell in the first half, I thought we were quite dominant.
“Ben Fowles, who we brought in from Dorchester, did ever so well, obviously Adam with his three goals – there were a lot of good contributions. I wanted to see what Taylor Scarfe is like at this level and he played both last night and the majority of the game today, he was really good on the ball and his temperament was good as well.”
Harrison got the ball rolling for Tavistock with a well-placed shot from the edge of the penalty area before Grant made it 2-0 by half-time by turning in a driven low cross from full-back Josh Robins.
It then became the Macpherson show as he finished off after some great work by Grant before he slotted the ball past the goalkeeper to make it 4-0 after good work by Harrison.
He then completed his hat-trick late on by turning another low cross as Tavi made light work of a disappointing Falmouth team.
It was the second game in two days at Tavistock after Dave Ottley’s Development team – padded out with some first teamers – fought back to claim an impressive 2-2 draw against another South West Peninsula League team, Bodmin Town.
The young Lambs were dealt a blow in the warm-up when Tom Watson suffered an injury in the pre-match warm-up and Brad Cox donned the ‘keeper gloves.
Bodmin were 1-0 up at the break and Tavi’s first team captain, Ben Cross, went in goal for the second period and he was beaten early in the second half as the Cornishmen extended their lead.
Luke Brown pulled a goal back for Tavistock, who then levelled things up late in the game through Eli Evans.
“It was a tough game,” Ottley said. “It was the first pre-season game for both sides, but nice for our young squad, we had a few first team players mixed in there, but by the end of the game, we had ten 16 year-old players on the pitch, some local lads and others from throughout Devon.
“I was really, really pleased with the performance. There were times when we were a bit disjointed, or didn’t play as well in the final third and take our chances, but that will come time.
“With a 12-24 month plan, it’s a great start against tough opposition – Bodmin are going to be a good, strong side in the Peninsula League – and I felt, in the last 20 with so many young players on the pitch, I thought we could have gone on and nicked it.”
Tavistock are next in action on Tuesday night when we host Liskeard Athletic (7.30pm).