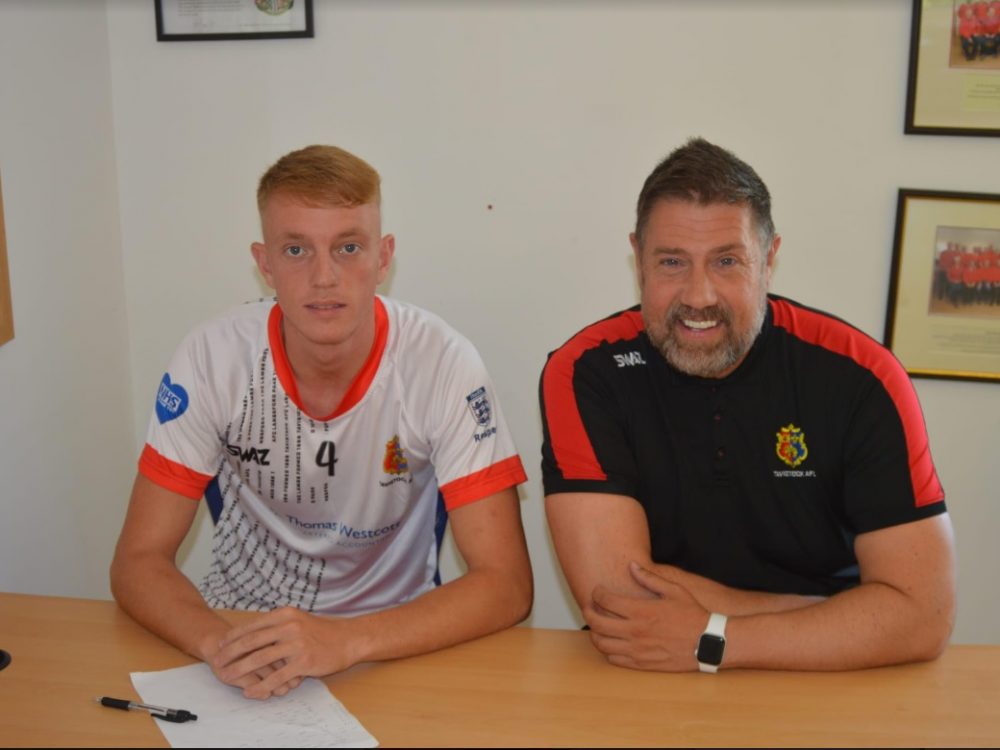 TAVISTOCK can confirm that trialist Taylor Scarff has been signed on for the club’s maiden campaign in the Pitching In Southern League Division One South.

The 21-year-old has been prominent in all of Tavi’s pre-season games so far and done enough to be taken on by manager Stuart Henderson, who has been left impressed by the youngster’s excellent performances and attitude.

“It’s great, Taylor has been doing pre-season for us. He’s been playing in the lower levels and has always been one of the players that we feel can step up,” Henderson said.

“It’s not just his footballing ability, it’s his dedication and commitment and you want him to be part of something that is significantly higher than he’s been used to and he’s been excellent in pre-season, not just with his performances, but his attitude.

“He’s been really committed and been at all of the pre-season sessions, so I am delighted with him. We have had a good look at him and we are happy, he’s had a good look at us and he’s happy as well, so he is added to the squad.”

Scarff joins the club having lost his way a little, in terms of his football. As a youngster, he was highly thought of and joined Liverpool’s Academy at 17 before returning home because he was homesick.

He spent time at Yeovil Town but, with it coinciding with his exams, the travel became too much and he has spent the last year or two playing local league stuff in the Plymouth area.

Now, though, Scarff is keen to take his football more seriously and he sees the Lambs as the perfect place in which to kick on once again.

“I’ve been wanting to do it for two or three years as I have been playing local football with my mates and it’s been holding me back to be honest and I thought: ‘let’s go and give it a real shot and see what happens,’” Scarff said.

“I signed last year as cover but nothing really came of it. But since being with the club in pre-season, I couldn’t have enjoyed it any more that I have to be perfectly honest, it’s been lovely.

“Everyone has been so welcoming and it is where I want to be. It’s a good bunch of lads and I am looking forward to the season starting and seeing how we do.”

On his football background, Scarff said: “I was at Yeovil while I was doing my GCSE’s but the travel became too much. I was commuting there three times a week and it was just too hard with everything that was going on at school.

“I also had trials at Aston Villa and Liverpool, got into the Liverpool Academy, but I got homesick and came home, so that didn’t really work out for me.”

However there was one experience that really stands out for Scarff and that was when he played international football at Under-17 level!

“I represented the British Virgin Islands over in Suriname, where I also got player of the tournament!” he said. “I did a soccer showcase thing and they found out I’d been on trial at Aston Villa – that’s when I signed for Yeovil.

“They got hold of me and a couple of other boys and I did this Daniel Sturridge Academy thing and the two were linked because a couple of people there were involved with the British Virgin Islands. They were looking for players, pulled me in and said they wanted to take me out to Suriname and they paid for everything – it was a really good trip to be fair!”

With no one from last season’s squad released, it leaves the squad large in numbers and that is set to be reduced after tonight’s double header which sees the first team take on Saltash United and Dave Ottley’s Development team head to Brixham.

“Over the next two or three weeks, we will have to let some go,” Henderson said. “We are roiling around with 22, 23 at the moment and that will have to be cut down to 18 before we start the season.”