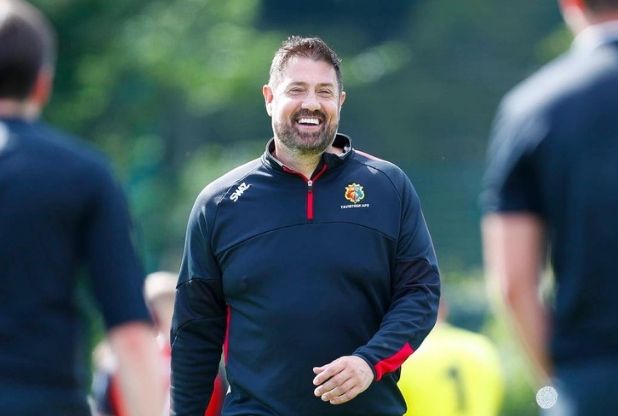 MATCH PREVIEW: Tavistock aim to build on opening day win at Larkhall Paulton Rovers are the visitors to Langsford Park

BUOYED by their fantastic 1-0 win at Larkhall Athletic in their first ever Southern League Division One South fixture, Tavistock welcome Paulton Rovers to Langsford Park on Wednesday night looking to build on their opening day success.

Captain Ben Cross struck the only goal of the game inside six minutes before a resolute performance saw the Lambs keep the home side at bay and chalk up a very impressive three points, which quickly helped to erase the disappointment of their FA Cup defeat to SWPL side Brixham seven days earlier.

The difference, according to manager Stuart Henderson, was attitude, with the Lambs focused and showing many of the characteristics that he felt were missing in that shock Cup defeat.

“We’ve gained some confidence from our result on Saturday,” Henderson said. “We had a few out against Brixham, and (Josh) Oaky was back for us on Saturday. He’s a big presence for us, he’s been with me for a long time and is a big personality in the dressing room.

“We laid out a few rules to people in the dressing room because what I didn’t like about us in the Cup game was that we were a bit like ‘big time Charlies’ that thought we just had to turn up to win the game because we are two leagues higher.

“Too many were going through the motions but on Saturday, we saw the other side to them. We didn’t have much of the ball, or play much football, but we were solid, gritty and did all the ugly stuff which we didn’t do against Brixham.”

Henderson has called for more of the same against Paulton where Tavi fans will get their first proper look at the new signings the manager has made this summer.

Former Plymouth Argyle and Crawley Town striker Alex Battle is the most notable acquisition, while Ed Harrison, Ben Fowles and Taylor Scarff have also come in. There is great depth to the squad as well with the loan signings of Exeter City pair Joe O’Connor and Aamir Stanford Daniels, who all passed their ‘new boy’ initiations on a buoyant coach back from Larkhall.

“We always do it where a new player has to sing a song and it was all good fun, but it was a poor standard of initiation!” Henderson said.

“But they did them and that’s the main thing – it helps to get them integrated into the squad and I am sure we will have a few nights out as well, which also helps to bring the lads closer together.”

Henderson added: “I have laid down some rules like I expect everyone to travel on the bus together, I don’t want people making separate journeys. With the new lads in and the two lads from Exeter as well, there needs to be that spirit in the squad which has been a key part of our success over the last six or seven years. That was there on the pitch on Saturday and I thought we looked very fit as well.”

On his summer recruits, Henderson said: “Ed Harrison was on my radar for a long time, I have known him since he was a kid. He went to Torquay, went to University and played Western League for Cribbs, then returned to the area.

“He is a loyal lad and promised he would give Camelford last season, but he joined us as cover and I wanted to get him permanently in the summer because he was my number one target.

“As you know, with the Academy I have, I like to think I have my finger on the pulse with young players and Adam Macpherson and Taylor (Scarff) are certainly two of the best young talents around; Ben (Fowles) is someone that came to us as he is moving down here soon and he’s fitted in very well and then the big one was probably Alex Battle.

“I have known Alex and his family for a long time now and helped him in his career with moves to Bolton and Crawley, but while he was offered a second year at Crawley, I think it was made clear to him and the younger players that opportunities would be limited.

“He had other options, but they didn’t work for him and we were delighted to get him. I think we were fortunate in the timing because if Alex had decided to leave Crawley earlier, bigger clubs with bigger budgets would have signed him, but they’d sorted their squads out by then and fortune favoured us for a change.”

To view the matchday programme, please click on the link below: