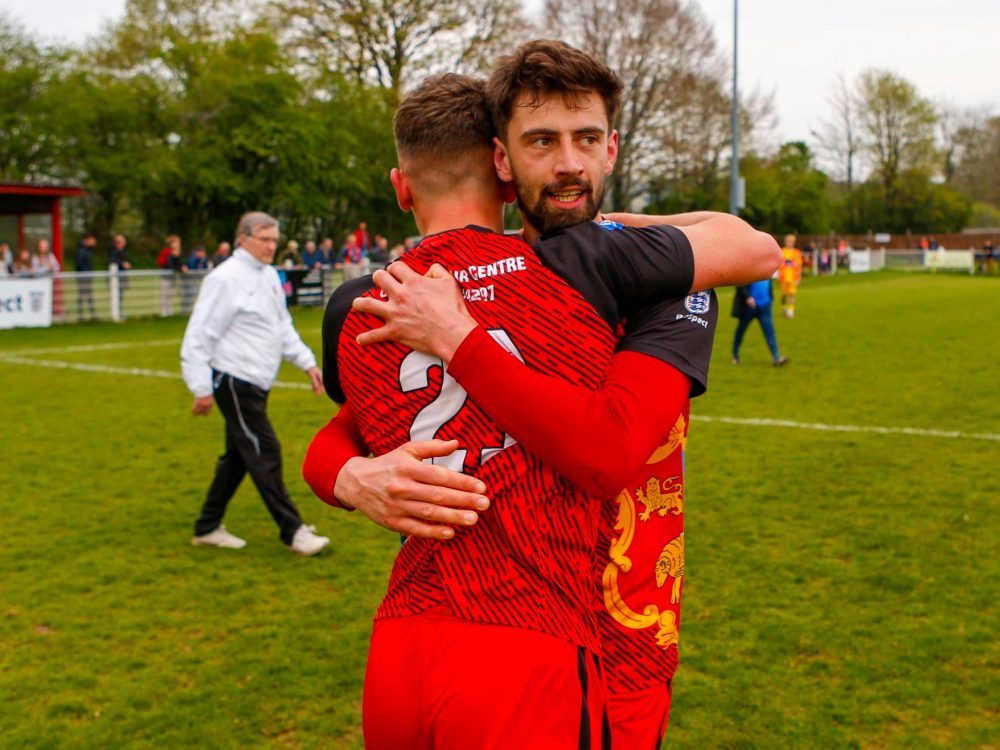 THE Lambs stepped into history as they started the match at Larkhall Athletic at their highest level for 135 years, after gaining promotion from the Toolstation Western League. Writes Eric Pinch.

It was absolutely sweltering hot with the temperature touching 90 degrees. Both teams were commended on putting on a spirited display for the 90 minutes with water breaks on every 15 minutes.

Liam Prynn was unavailable and Dan Kiota was injured, but Josh Oak returned in goal and experienced campaigner Josh Grant led the attack.

Tavi got off to the perfect start with the game just six minutes old as Ben Cross’s throw in allowed Grant to turn his marker and proceed down the wing. His low cross found Ed Harrison whose shot was blocked with the ball coming back out to Cross on the edge of the area to send in a unstoppable shot into the net to give the Lambs the lead. It was just the tonic the Lambs needed after the previous week’s defeat to Brixham in the FA Cup.

Larkhall’s first sniff at the Lambs goal came just prior to the first water break on 15 minutes. Harry Brocks’ effort cannoned off team-mate Robert Hobbs into the arms of Oak. Grant then chased a long ball that keeper Max Evans did well to block and the rebound fell to Ben Fowles only to see his effort go over the bar.

Oak’s free kick from deep in his half found Josh Parry out wide to go on a run only to see his effort tipped away for a corner and from it, Cross would see his volleyed effort sail over.

The last third of the first half saw little goalmouth action as the Lambs deservedly went in a goal to the good at half time.

The “Larks” came out singing after the break and laid siege on the Lambs goal with a succession of corners in the first 10 minutes, but the Tavi defence held firm clearing any danger. A great chance just prior to the hour came from a Fowles free kick. Grant controlled the ball in the goal area and turned, but shot over from close range.

Warren Daw made a welcome return to the side after a lengthy absence due to work but picked up a yellow card for a late challenge.

Aaron Stanford-Daniels then came on for Parry. The Lambs were able to soak up any pressure from the Larks and were looking good on the break when Iestyn Harris broke from deep to get to the by-line but his cut back was behind all his team-mates and the chance was gone.

The Larks’ best chance came on 85 minutes when they got an effort on target but it was Man of the Match Ben Cross who cleared off the line with Oak beaten.

As the match drew to its conclusion it was the Lambs that had the better of the chances, again they would break from deep as Alex Battle would run from the halfway line only to shoot at the keeper. He would then charge down a clearance from the keeper turn the ball back into the area to see Grant give chase, it appeared the keeper fouled him as both fell in the area but appeals for a penalty were dismissed.

There was almost 10 minutes of added time with water breaks and substitutions but the Lambs held firm with another chance to seal the game as Stanford-Daniels strode forward but shot just wide.

A fantastic display and result from the whole squad. The Lambs are next in action with a welcome return to Langsford Park on Wednesday when they play host to Paulton Rovers.