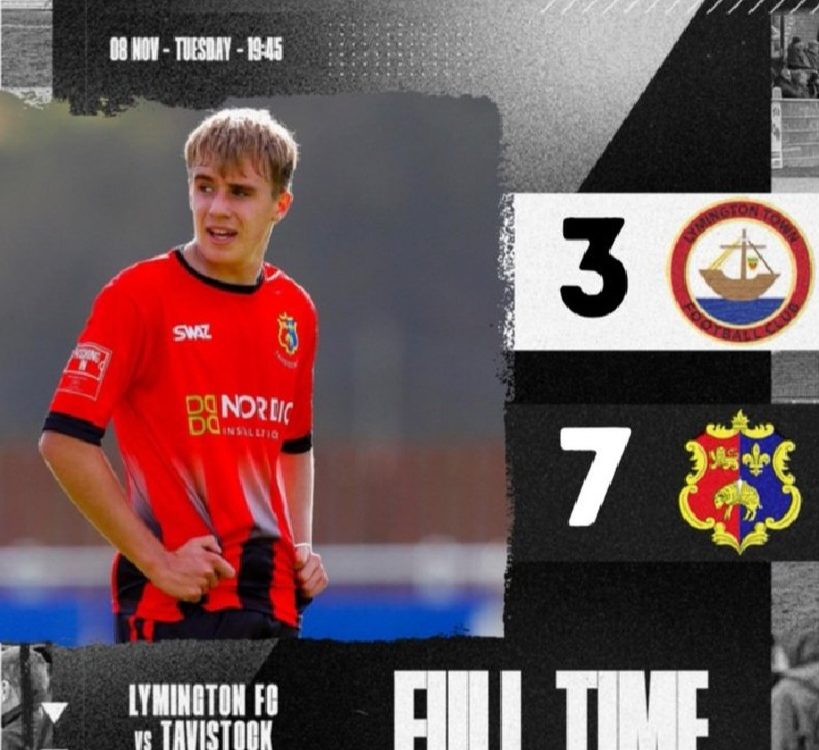 Lymington Town 3, Tavistock AFC  7 (seven)
This fixture was originally arranged for a Saturday but due to the Lambs continued success in the F A Trophy it meant a 300-mile week-night round trip for the Lambs and their little flock of supporters. It was also not a good night of conditions with a strong wind and heavy showers all to be contended with.
The only change in the line up from the convincing victory against Frome was Josh Robbins coming in for Captain Ben Cross.
There was an early setback for the Lambs as the home side took the lead on nine minutes from a penalty, after Taylor Scarff had fouled in the area. The home fans’ celebrations were short lived however as the Lambs equalised within two minutes.
A cut back from the by-line was swept home by Tallon Burns. Josh Grant then saw an effort ruled out for offside and Liam Prynn, Ed Harrison and Alex Battle would also go close. Keeper Sam Borthwick then prevented the home side from taking the lead again, before the Lambs took the lead themselves on the half hour. A series of shots rebounding off both keeper and defenders saw Grant get the final touch as it deflected into the net.
Two minutes later and it was 3-1 to the visitors as Battle slipped the ball under the keeper from close range; a great, first-half of dominance from the Lambs.
The second half was only five minutes old when the Lambs got their fourth – a sweeping move that saw Battle play in Prynn, who shot low at the near post. The home side then threatened with a speculative effort that bounced off both upright and cross bar.
Robins was then unfortunate to concede a penalty for handball as the home side made it 4-2 on the hour.
Four goals would be scored in the last fifteen minutes when Prynn’s looping header appeared to go over the line and the keeper converted it by taking it over. Grant then went around the keeper to make it 6-2.
The home side were not finished though. Borthwick’s free kick bounced off an opponent for him to stroke into an empty net, but the Lambs would have the final say as substitute Joe O’ Connor rifled one in from distance. It was a strange,
old game, but it propelled the lambs up to second in the table with games in hand on the teams all around them.
The journey home was equally strange with main roads closed, diverting us all around Dorset, Somerset and Devon, but it was all worth it for the three points.