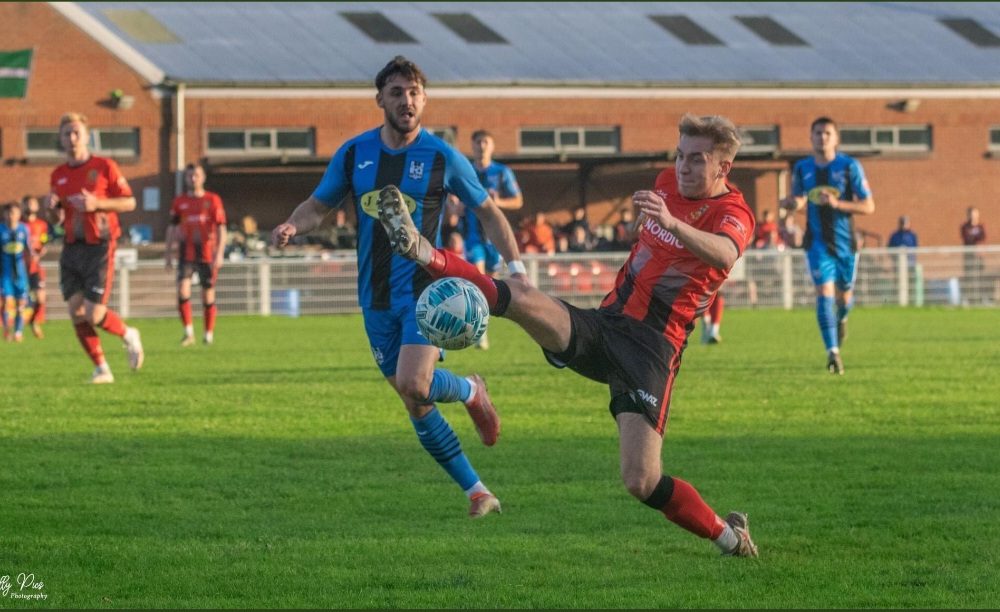 The Lambs mini unbeaten run came to an end this weekend as the visitors took all three points in a closely fought game. There was just one change to the starting line up from the midweek jaunt to Lymington as Capt. Ben Cross returned to full back at the expense of Iestyn Harris.
With the sun at their backs the Lambs had the better of the opening exchanges with at least three good chances to open their account. First Alex Battle shot wide, then Dan Evans would see his header from Tallan Burns’ corner go wide of the target and then Burns also provided Liam Prynn with a through ball that went just wide of the mark. Missed chances for the Lambs, and they paid dearly when the visitors took
advantage. Bartlett’s sweeping cross field ball to Bedford saw the ball laid back for him to sweep it home from 20 yards.
The home side looked to draw level throughout the remainder of the half and the nearest they came was when Prynn chested down for Battle to shoot wide and then Prynn went close again on the stroke of half time.
The Lambs were soon back on level terms on 55 minutes, with Josh Robins coming in from the left, avoided challenges to put the ball into the area and after a series of ping-pong touches the ball finally fell kindly for Prynn to slot home from close range.
The Lambs and their followers sensed a second, but the Magpies defence held firm from a sustained amount of home pressure. They almost went ahead as Battle won the ball from Arnold to send a curling shot just wide of the mark.
The Lambs also defended well during this second half with keeper Sam Borthwick in action. He saw Bartlett’s effort go wide and then dived low to keep out Morgan’s header. However, he was beaten on 77 minutes, when Baker won a midfield ball and released Morgan down the right, who managed just for once, to get the better of defender Taylor Scarff to cross low for Baker to strike home.
The Lambs continued to seek an equaliser in the closing minutes, but it was not to be as the Magpies just edged it.
A disappointing day for the Lambs, but a glance at the table still sees them in a good position and the match against Bashley on Wednesday night will hopefully be a chance to get back to winning ways.