PLYMOUTH Argyle manager Derek Adams scored with the football fans who turned up at the Red and Black Club in Tavistock for a special event on Monday night.

Mr Adams was invited by Tavistock AFC and the Community Football Club for a ‘question and answer’ session; it proved not only an entertaining night for around 100 people who attended but also an important one for the local clubs as it strengthened its links with the professional Football League side.

The audience were keen to find out what Mr Adams felt of his team’s progress to second place in league two with the real possibility of promotion this season.

Mr Adams, who has tasted promotion success as a manager in his native Scotland with Ross County, told fans: ‘We have had a very good season so far after 30 games; we’re winning a lot, playing some exciting football and more people are turning up at Home Park to watch us. With 16 games to go in a tough league, where teams have different styles of play, we now have a very good chance.

‘You can’t look too far ahead in football but the players are very focused and the loan players have come in, played well and added a lot of energy.

There were also some light hearted moments. When one man asked what did Mr Adams expect when first he came down here from Scotland? Before the manager could answer the fan then proceeded to enlarge his question. The Argyle manager replied: ’Well the first thing I thought was that I didn’t expect such a long question! which brought appreciative laughs from the audience.

As for the fans, he praised those supporters who turned up to games both home and away —’the players really appreciate it. We want the fans to sing their hearts out. It creates a great atmosphere and gives a boost to the players.’

Mr Adams, aged 40, has been in professional football management for eight years and has more than 300 games as a manager under his belt. He said his management career has been influenced by other managers he has worked or talked with, particularly in the Scottish game, such as Alex Ferguson, Billy Davies, Eric Black and Tony Butcher.

Answering questions on what kind of budget has he to work with at Argyle he replied: ‘I always worked within the budget set by the club. I don’t ask for a penny more or a penny less. If it’s a question of making a profit or being successful I would like to be both but it’s no good spending beyond your means. You know where that can lead to.’

Asked by Times Sport what Tavistock means to a professional club like Argyle he replied: ‘Tavistock has a very important part to play; its a location not far from the city and important as a fan base. We already have a connection with our U18s and youth development here and hope to strengthen and develop that relationship further in the coming year.’

Chris Fenner, the chairman of Tavistock AFC, said so many people enjoyed the evening.

‘Derek was a natural, most generous with his time and the level of support, from Argyle fans on the night and my colleagues at TAFC in preparation, for our first public event in a very long while, stands us in good stead.

‘This was yet another opportunity to further develop Tavistock Football Club’s partnership with Plymouth Argyle and I look forward to seeing what fruits this will bear in the future.’ 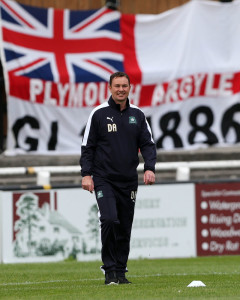