The History Of Football In Tavistock

Adhoc football, an ad hoc cross between rugby union and soccer and perhaps a few other games to boot, took place between Plymouth and Tavistock sides from the mid 1870s, but it took a letter in the Tavistock Gazette from scribes under the pseudonym of “Wei/wisher” and “Halfback”, to attract the attentions of two local businessmen. 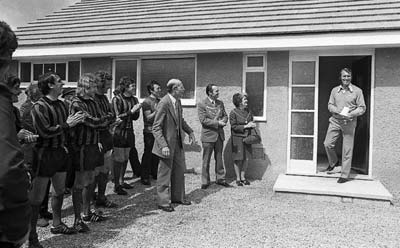 The club was thus founded on September 8th, 1888, the foundation year of the Devon County FA, when sportsman and businessman Herbert Spencer summoned “interested persons to assemble at the Guildhall where a committee was elected under the chairmanship of his brother, Wilfred, with Herbert as his deputy and another brother, Kingsley, on the committee with Tom Owen Esq as secretary. The old Tavistock Grammar School playing field in Russell Street hosted the newly formed club and the first match against the Duke of Cornwall Light Infantry resulted in a 1-0 victory. The first AGM held at the old Temperance Hotel, now the Ordulph Arms, proudly recorded a first season playing record of Won 13, Lost 3 Drawn 1.

By 1890 the club adopted a strip of blue and old gold and formed a second team, moving two years later to Green Lane, Torlands courtesy of the proprietor of the Bedford Hotel. Going from strength to strength the team won the league and were cup runners up in 1900-1901. On one day in 1903 at Torlands on the edge of Dartmoor, a game had to be abandoned due to a sudden blizzard. In the same year wild ducks invaded a flooded penalty area and set up home for a week in a makeshift pond, resulting in a postponed fixture. No wonder that over the next few years venues changed, from a return to the old grammar school pitch, to Green Hill and Sandy Park.

It is believed that in 1913 the entire Tavistock team was selected to represent the County. During the period of 1914-1918 structured football was abandoned.

Eventually there were at least three other clubs in the town, Tavistock Comrades, Bannawell Blues United and Tavistock West End. Amalgamation in 1939 produced the familiar colours of red and black. A welcome change to the salmon pink shirts with chocolate collars and cuffs of 1919. The years 1920 to 1930 were successful times with excellent results in the league, Bedford Cup and Senior Devon Cup. Sadly the next decade saw a decline in both results and attendance. Play ceased at the end of the 1931-32 season due to debt. Jumble sales and whist drives were held to ease the financial situation and football resumed once more in 1937.

The onset of World War II put things on hold until 1945 when the Lambs joined the Plymouth Combination League First Division. In 1947 the Club President Herbert Thomas Langsford purchased Langsford Park, giving it under trust to the club in 1949. A carved commemorative stone serves as a reminder of his benevolence.

This site uses Akismet to reduce spam. Learn how your comment data is processed.