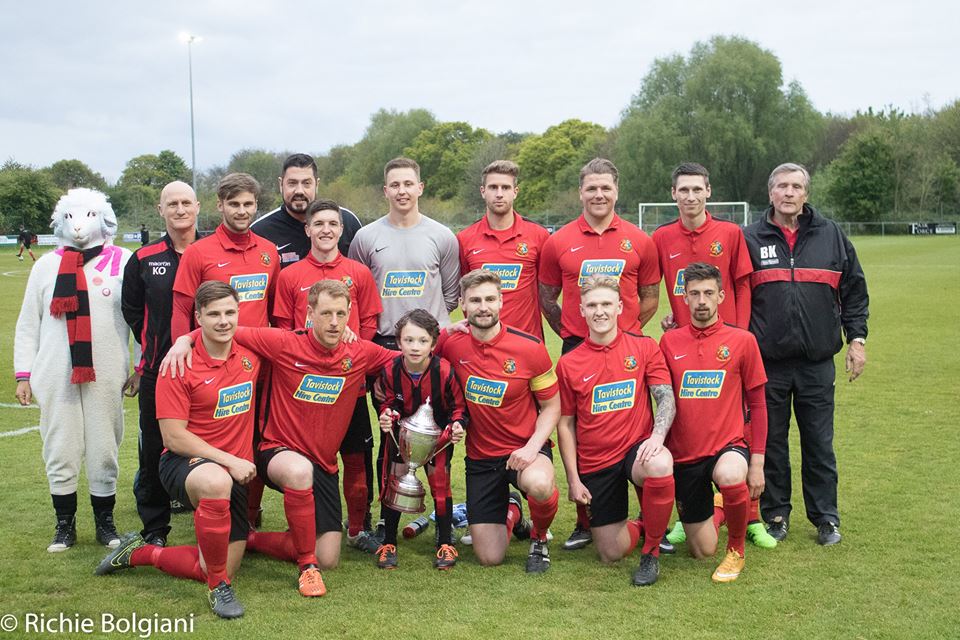 The Lambs completed their league program last Friday with a hard earned victory over Plymouth Parkway. The hosts formed a guard of honour in acknowledgement of the fine achievement of the Lambs becoming Champions of the South West Peninsula Premier League Champions, as they took the field.

The Lambs got off to worst possible start conceding in the second minute. A free kick from Jordan Trott saw Josh Zimmerman glance the ball into the corner of the net.

The visitors responded after this set back and started to control possession, producing some fine pass and move football.  Jack Crago had a good opportunity to level the scores but his shot was well saved by Cory Harvey.

The game was all square in the twelfth minute when following another fine move the ball came to Glynn Hobbs, his thunderbolt shot from twenty five yards went right in the top corner of the net to record his 53rd league goal for the season. Ten minutes later the visitors should have taken the lead when Dave Hallett found Glynn Hobbs with a short corner kick, but Hobbs shot whistled inches over the bar.

The Lambs continued to control the play creating several scoring opportunities. In the 34th minute a great passing move saw Hallett find Hobbs, his perfection pass found Crago in the penalty area, but his shot went over the crossbar. Josh Grant then shot just wide of the target from twenty two yards.

Parkway then produced a fine move down the left flank where Trott produced a wonderful cross into the six yard box which was only inches out of the reach of the on rushing Wright and Zimmerman. Josh Grant was then called upon to make a smart save to deny Head from scoring.

Jack Crago then had a fine effort well saved by Harvey, the ball fell to Glynn Hobbs, but he dragged his shot inches wide of the target. The Lambs took a deserved lead in the42nd minute when a fantastic move saw Dave Hallett find Glynn Hobbs who turned provider as he played the perfect defence splitting pass to put Jack Crago in on goal, who calmly placed the ball wide of Harvey into the corner of the net.

The Lambs started the second half well with Tyler Elliot going close and Jack Crago was crudely brought down just outside the penalty area, but Dave Hallett’s kick was cleared.

Parkway were now giving a really good account of themselves and the visitors defence were now coming under some pressure, but the Lambs back four were in fine form again, so the home team found it very difficult to break them down.

A really good move between Dave Hallett Ben Cross saw the ball find Glynn Hoos but his fierce shot deflected away for a corner kick. From the corner kick a Dan Evans header flashed inches over the crossbar.

Parkway levelled the scores in the 73rd minute when following a move down the left a cross into the box was cleared but the ball, fell to Jamie Bass who curled a left foot  from the angle of the penalty area, into the far top corner of the net.

Josh Oak was then called upon to make a really good save pushing a shot from Thompson away for a corner kick.

The Lambs should have taken the lead in the 80th minute when Hobbs and Grant combined well to set up substitute Ricki Shepherd in, but he sliced his shot wide of the target when he should have hit the target.

Five minutes later the Lambs did regain the lead when Glynn Hobbs made a great powerful run into the penalty area before squaring the perfect pass to find Josh Grant who rammed the ball home from six yards.  Parkway pushed hard in the last few minutes but the Lambs defence held firm in order to record another victory.

This was another really good team performance, to complete what has been a remarkable season, that will go down, as one of the best in the clubs history.

Everyone can be proud of what they have achieved, it’s been a complete team effort.

The Manager Stewart Henderson and Assistant Ken Ord along with all the players have been brilliant throughout the season and done the club proud. The next big challenge for this group is to successfully defend their title next season.

Thanks must also go to our loyal supporters who must have enjoyed this successful season.