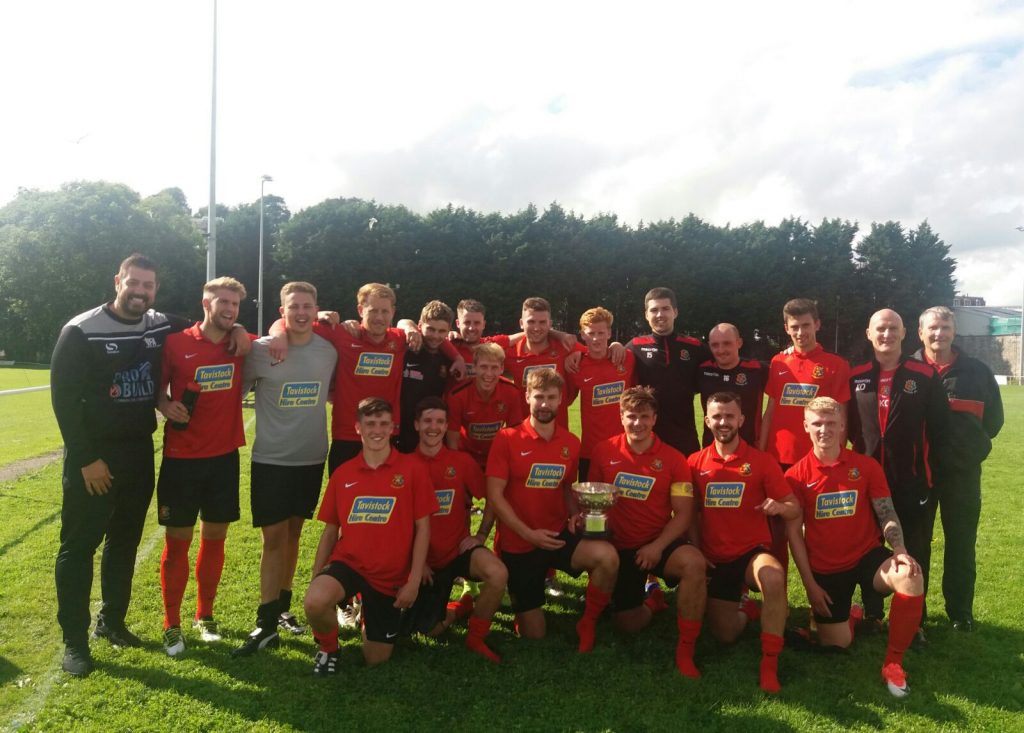 The Lambs won the South Western Peninsula Leagues Charity Bowl. The League Champions convincingly beat last seasons Leugue Cup winners St Austell. The Lambs were slow out of the blocks as St Austell started at a fast pace. They almost opened their account in the opening minute but Goldsworthy shot wide when well placed . St Austell took the lead in the third minute when a corner kick a Reski header was partially cleared, the ball fell into the path of Liam Eddy who slammed the ball home from six yards. This set back stirred the Lambs into action and after the opening ten minute they got control of the game. Their passing improved and this created some holes in the St Austell defence. The Lambs deservedly equalised in the 15th minute when a great passing move  saw Josh Grant provide the perfect pass for Jack Crago to slot home from eight yards. St Austell almost restored their lead in the 23rd minute when Liam Eddy saw his fine effort go wide of the target. Two minutes later the Lambs took the lead when a fine pass by Miller found Dan Sullivan, his penetrating run and cross to the far post saw Luke Brown fire home from twelve yards. Three minutes later the Lambs made it three when they unlocked the St Austell defence with another terrific passing move. Dave Hallett and Dan Sullivan exchanged passes, Sullivan found Luke Brown, who provided the defence slitting pass to Jack Crago who calmly back heeled the ball into the net. The Lambs were now dominating the game with fine pass and move high tempo football. It came as no surprise when they made it four in the 36th minute, another great passing move from defence through midfield to the forwards was really pleasing on the eye. Dave Hallett found Sullivan his fine pass found Luke Brown who rounded his marker before providing the perfect cross for Jack Crago  to complete his hat trick. Three minute later the Lambs added to their goal tally with another fine move. Miller and Sullivan combine well to open up the St Austell defence to provide the pass for Josh Grant to fire home from fifteen yards. Two minutes later Lambs keeper Josh Oak  made a terrific save to deny Goldsworthy from reducing the arrears. The Lambs continued to cause the St Austell defence all sorts of problems, but the half time whistle came with the Lambs leading by five goals to one. The second half  saw the Lambs increase their lead when Jack Crago was brought down in the penalty area area, the referee awarded a spot kick, up stepped Josh Grant who thundered the spot kick home. The Lambs were dominating the game and should have added to their goal tally, as Grant fired inches over the bar in the 49th minute before Sullivan fired inches wide of the target from an acute angle. On the hour Manager Stuart Henderson made some changes Ryan Swain replacing Lewis Daw. Josh Oak made a smart save two minutes later to deny Watts from reducing the arrears. Crago and Sullivan saw Luke Brown in on goal but his shot was saved by Chapman. Substitutes Ricki Shepherd and Jack Tribble were also given a run out in the last quarter of the match. The pleasing feature was that they slotted in well and did not upset the rhythm or balance of the team. The Lambs continued to dominate a team that are fancied to be one of the challengers for the league title. The Lambs went very close to increasing their lead a fine move saw found Josh Robins on the edge of the box but his first time effort was inches over the bar. St Austell’s Jason Vincent then missed a sitter in the 90th minute when he fired over the bar from six yards. This was a terrific team performance by the Lambs, their movement off the ball was superb providing passing options for the player on the ball. There were a number of outstanding performances, Dave Hallett was superb in the middle of the park, the back four were terrific and kept the high quality St Austell forwards under control. Dan Sullivan had a tremendous game, with Josh Grant and Jack Crago causing the opposition defence problems throughout Goalkeeper Josh Oak showed his class and talent making some fine saves when required, and his handling of crosses was superb. New signing Jay Miller and Luke Brown were really good in the middle of the park. The team have now set a bench mark and with this fine performance the must be confident as they prepare for the new season.