The final at Wembley is a mere 13/14 games away, the first round proper is 5 games away with the likelihood of the Lambs progressing to these far off rounds very remote. but one game at a time there is the incentive of picking up some useful cash in these early rounds.

With a few new faces to start the season, the Lambs called upon the services of former custodian Jack Ord in place of regular keeper Josh Oak who was on best man duties elsewhere.

It was no surprise that they went 1-0 down after 27 minutes albeit under unfortunate circumstances, Shepton Mallett striker Tom Hill got himself into a good position inside the Lambs penalty area, his shot flew past Ord, hit the bottom of the near post, rebounded into play, struck Ord on the back and rebounded into the net.

The Lambs had a great chance toward the end of the first half when Dave Hallett put Jack Crago in behind the defence only for his shot to straight at the keeper Easterbrook.

The second half started with the Lambs on the attack from the first minute with Crago and Josh Grant both going close before they were back on level terms. On 55 minutes Dan Sullivan put Crago through down the left wing, he worked himself to the by-line before crossing low and there was Jake Miller rushing in to sweep the ball into the back of the net 1-1.

The home side forced 2 corners immediately but from the 2nd the Lambs broke with a jinking run from Luke Brown to set up Sullivan who rifled home on the 57th minute. The Lambs were now in control, Dan Evans put Brown in on goal but he was fouled in the area for the referee to point to the spot. Up stepped Josh Grant to smash the ball high into the net to make it 3-1. 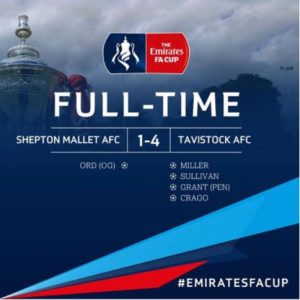