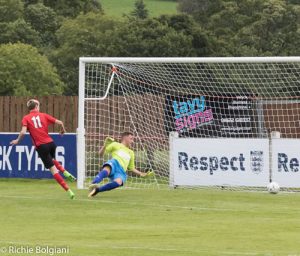 The Lambs are through to the next qualifying round of the F. A. Cup with a hard earned victory over a good Shaftesbury team.
The home side got off to a good start playing some fine football from the start.
In the fourth minute a high quality move saw Jack Crago make a penetrating run down the left, his cut back found Josh Grant, but his shot forced a very good save from Card in the visitor’s goal.
Six minutes later another fine move ended with Dan Sullivan providing a defence splitting pass to find Josh Grant, who cut back inside two defenders but shot wide of the target from ten yards.
The Lambs deservedly took the lead in the twelfth minute, great work by Josh Grant found Dan Sullivan, his fine cross into the six yard box found Jack Crago at the far post, who calmly slotted the ball home.
Shaftesbury were forced to make a change when centre back Vailis could not continue after picking up an injury, with Beal, taking his place in the 15th minute.
The visitors first real effort on the home goal came in the sixteenth minute when they were awarded a free kick 22 yards from goal, but Welch shot over the bar.
The Lambs went close to doubling their lead when a Dave Hallett corner kick was headed inches wide of the target. The home team were now dominating the game and created several scoring opportunities, Sullivan found Crago but his shot went inches over the bar, then Crago saw his header from Hallett’s corner kick flash just wide of the goal.
The home team doubled their lead in the 28th minute when a really good passing move saw the ball find Dan Sullivan, his inch perfect pass put Jack Crago in on goal, who calmly lobbed the advancing keeper Card into the net.
This stirred the visitors into action, creating a chance when Bentimin, shot just wide of the target.
Josh Robins then made a penetrating run down the left his cross was cleared by a defender for a corner kick. A terrific cross from Dan Sullivan was inches out of the reach of the on rushing Crago.
Josh Oak in the home goal then made a fine save to deny Bentimin. The half closed with the Lambs just two goals ahead, when their performance deserved more goals.
The second half started with the Lambs continuing to play some fine football, following a fine move Jack Crago headed the ball down for Josh Grant but his fierce shot that looked destined for the net was deflected over the bar for a corner kick. Warren Daw saw his header from the corner kick flash over the bar.
Manager Henderson made changes on the hour when Tyler Elliot replaced Luke Brown. The home team were awarded a free kick, which resulted in Warren Daw’s header going wide of the target.
Five minutes later Elliot found Crago, with a quality cross but his shot was brilliantly saved by Card. This resulted in the visitors increasing the tempo of their game. Shaftesbury were awarded a free kick twenty three yards from goal, full back Flint hit the perfect shot around the defensive wall low into the corner of the net to reduce the arrears.
In 70th minute things got worse for the Lambs as Josh Robins was shown a straight red card following a clash with an opposing player. This saw Centre back Daw switch to left back, Ryan Swain going to centre back and Elliot filling in at right back.
It was now backs to the wall for the home team, and Shaftesbury saw the opportunity to possible win the game or at least get a replay, so they immediately brought on an extra striker Collohan for Smith.
The Lambs were now made to defend in depth, relying on an occasional break to create any scoring opportunities. It was now the visitors that were on top and the Lambs were forced to defend and to their credit they did this well, home keeper Josh Oak’s handling was superb, collecting with some really good crosses that came into the penalty area.
On the break Jack Crago had a good shot saved by Card. In time added on, Oak made a terrific save to deny Welch to see the Lambs into the next round of the competition.
The Lambs nearly paid the penalty of not converting their scoring opportunities in the first half, the game should have been out of reach of the visitors as the score line should have been at least double the actual 2-0 lead. The defence were resilient when they came under pressure in the last quarter of the game. Over the ninety minutes of play the Lambs deservedly go into the next round. There were a number of really good performances, Josh Grant lead the front line brilliantly, Jack Crago’s two goals were crucial. Hallett, Sullivan and Miller again showed their quality in passing, whilst in defence centre backs Dan Evans and Warren Daw were very commanding.
Well done to all the team.