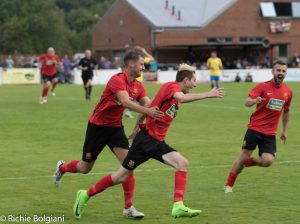 A good sized crowd witnessed a great cup tie, that saw two teams giving their all to get the victory. The result does mean that the Lambs will be in the next round draw, which takes place before the replay at Taunton. It was definitely a game of two halves, with Taunton having showing why they are undefeated in the Evostick Southern League and Lambs the better of the second period causing Taunton all sorts of problems with their pass and move football.
Taunton took control from the start, from a free kick, Irish glancing header saw Powell head just wide of the target. The hosts were then made to make a double goal line clearance to deny the visitors taking the lead in the seventh minute. They then went close again from another free kick, when their aerial advantage with several players measuring well over six feet, saw Irish head wide of the target.
The Lambs first real attempt on goal came in the twentieth minute when Jack Crago broke down the left, his pass found Dan Sullivan, his terrific shot went inches wide of the target. Josh Grant then had a header saved by the Taunton keeper.
The visitors continued to press forward and forced several corners, which were causing the Lambs defence problems, however they showed their resilience, with keeper Josh Oak dealing well with the crosses when under severe pressure from the tall attackers.
Taunton took the lead in the thirty third minute when a break down the left saw the ball find Chamberlain who fired home from eighteen yards.
Having got through a period of severe pressure, the Lambs started to get their passing game going. A great effort from Josh Grant was well saved by Irish in the visitors goal. Crago then saw his header from a Dave Hallett corner kick go just over the bar. Just before the interval Irish pulled of a good save to deny Warren Daw fro levelling the scores.
The second half started at a furious pace Dan Sullivan shooting over in the opening minute. Things got worse for the Lambs in the 50th minute when the visitors doubled their lead, an attack down the right saw a cross into the penalty area, a speculative hooked shot from Powell nestled in the corner of the net.
This really stirred the Lambs into action, as Irish was forced to make a really good save to deny Josh Grant reducing the arrears. The home team were now getting their fluent pass and move football in action. They deservedly got their reward on the hour when a fine move saw Miller find Jack Crago, his pace saw him fly pass his defender, cutting in towards goal before unleashing an unstoppable shot into the net.
The Lambs were now in control putting more and more pressure on the Taunton defence. A Luke Brown cross saw Jack Crago’s header brilliantly saved by Irish. Crago’s pace was causing the Taunton defence real problems, as Irish was again called into action to deny him levelling the scores.
The Lambs deservedly equalised in the 83rd minute, another flowing move saw the ball find Tyler Elliot his perfect cross was headed low into the far corner of the net.
The home team came very close to snatching victory in the dying minutes but the visitors held firm, so a replay will be necessary to decide who goes through to the next round.
This was a fantastic game of football between two very good teams. The replay will no doubt just as competitive. The Lambs will need to retain possession better than they did in the early stages of this game. If they can get the fluent football going as they did in the second half then they will cause the opposition real problems.
A number a really great performances, with everyone playing their part. However it goals that count so man of the match was Jack Crago.