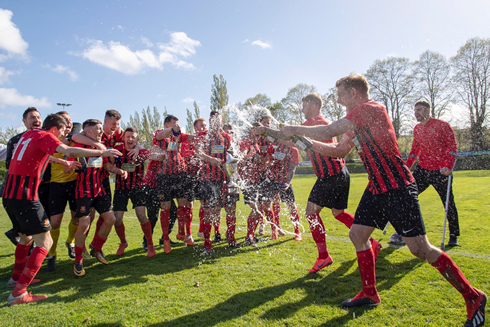 A large number of Lambs supporters made the trip to Coach Road for this very important fixture.

At the start of April the Lambs were nine points behind Exmouth Town with three game in hand. Exmouth continued to win their remaining matches, so the pressure was on to ensure it went to the final fixture.

The team had a magnificent run in playing six matches, they gained maxim eighteen points, scoring thirty one goals, and only conceding two. This left them knowing that only a win would suffice to seal the title on the last day of the season.

The Lambs were fast out of the blocks with Tyler Elliot provided a great cross which was only inches out of the reach of the on rushing Josh Grant. The visitors continued to press high up the pitch, making it difficult for Argyle to get their fluent passing game going.

The Lambs deservedly took the lead in the eighth minute when a fine move saw the ball find Jack Crago, he cut into the box a provided a perfect pass for Josh Grant to slot home from eight yards. The visitors continued to control the play attacking at every opportunity, they almost doubled their lead in the 14th minute when another fine passing move saw Josh Grant’s fierce drive turned away for a corner kick by Argyle keeper Hillier. Warren Daw saw his header go inches over the bar from the the resultant kick.

Argyle had plenty of possession in their own half, but when they did get the ball forward, they found the Lambs defence were compact, restricting them to very few attempts on goal. The nearest they came to levelling the score was when they were awarded a free kick in the 38th minute, but the shot was wide of the target.

The Lambs created a couple of scoring chances, but Hillier in the Argyle goal made two good saves to keep his side in the game.

The second half continued as the First with the Lambs continuing to have the better of the exchanges, so it came as no surprise when they doubled their lead in the 55th minute. A top quality move saw Jack Crago get into the penalty, he was brought down by the Argyle keeper. The referee immediately pointed to the penalty spot. Up stepped former Argyle Academy player Josh Grant to blast spot kick into the roof of the net.

Argyle responded well after this set back, and reduced the arrears just before the hour mark. A long ball over the Lambs defence was latched onto by Klaidi Lolos who rounded Lambs keeper Josh Oak, before slotting the ball home. The visitors then had a nervy five minutes before getting back into their rhythm.

Once they settled the Lambs got back in the grove,  Josh Robins made a penetrating run before passing to Luke Brown, but his fine effort was well saved by Hillier.

The Lambs restored their two goal advantage in the 67th minute when a thunderous free kick taken by Josh Grant could only be parried by keeper Hillier, Liam Prynn was the first to react and slotted the rebound home from close range.

Things got worse for Argyle  when Ryan Law was red carded for an infringement.

The Lambs were now in complete control an sealed a convincing victory in the 81st minute when another flowing move saw Jack Crago provide a fine cross for Luke Brown to fire home from fourteen yards.

Manager Henderson then made further changes with Tallan Burns replacing Luke Brown and Sam Hughes for Reece Shanley.  The Lambs saw the remainder of the game out to record a great win.

Exmouth could only manage a draw at Bodmin so the Lambs won the title by two points, rather than goal difference.

The Lambs were in top form, comfortably beating a strong Argyle team including several full time professionals. Every single player involved can be very proud of what they have achieved, in a season to remember. The team suffered a number of setbacks, losing a number of players to long term injuries, but this never deflected the squad from their ambition to win the title.

The man of the match was “Team Tavistock A F C ” for a magnificent performance to win the South West Peninsula League Title. Well done to everyone involved with Tavistock A F C .