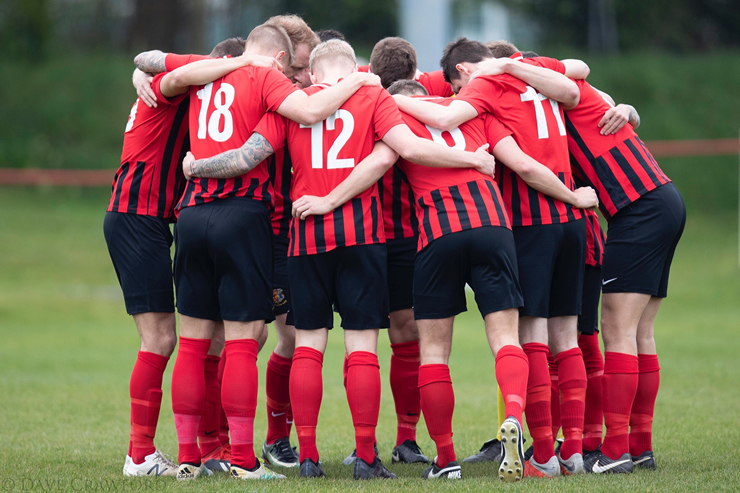 The Lambs moved to pole position in the league table on goal difference, following this good win over a hard working Helston team. Both Exmouth and the Lambs play their final League fixture next Saturday, only an win over Plymouth Argyle Reserves will ensure winning the League Title.
The game got off to a fast start with both teams playing some fine football. The Lambs almost took the lead in the sixth minute, but Jack Crago fine shot cannoned back off the upright.
Four minutes later Helston were awarded a penalty kick when Reece Shanley was adjudged to have handled the ball in the area. Josh Oak produced a terrific save to deny Bye opening the scoring.
In the eighteenth minute Captain Lewis Daw pulled up with an injury, and could take no further part in the game. Matty David took his place at the heart of the Home defence.
Five minutes later Luke Brown scuffed his shot when well placed. However with their next attack the Lambs forced a corner kick. Dave Hallett’s beautifully flighted cross saw Jack Crago power home a fine header.
The Lambs continued to have the lions share of possession with the visitors working very hard to get a foot hold in the game.
Just before the interval the Lambs produced one of their classic moves that split the visitors defence open, the move ended with Reece Shanley providing a beautifully weighted cross for Josh Robins to flash home with his right foot to double the home teams advantage.
The Lambs really stepped up the pace in the second half, producing some terrific passing football , which created several scoring opportunities. Both Josh Grant and Jack Crago both saw their fine efforts go just off target.
The home team continued to dominate play and it came as no surprise when they extended their lead in the 70th minute. Another great passing move saw the ball,find Tyler Elliot who played Jack Crago in on goal, he fired low into the corner of the net.
Liam Prynn the replaced the impressive Elliot, he was in the action straight away with a shot that was just wide of the target.
Wyatt in the visitors then made a magnificent save to deny Jack Crago from scoring. Tallan Burns then replaced Luke Brown. Burns was soon in the action forcing Wyatt to make another great save to deny him from scoring.
The visitors tried their hardest but never looked like penetrating an tight well drilled home defence. In the 85th minute the Lambs increased their lead when a brilliant move opened up the Helston defence, Josh Grant was in on goal, but he unselfishly laid the ball square to give Jack Crago the easy task of slotting the ball home from three yards to complete his hat trick.
To be fair to Helston they never gave up and worked really hard, but they were no match for the Lambs who were in very good form.
Another very good team performance with everyone playing their part. Man of the Match Jack Crago, who worked tirelessly and scoring a hat trick.
Manager Stuart Henderson said ” I was really pleased that the boys expressed themselves and, arguably, we could have scored more today. I hope as many of the supporters can travel to the game next Saturday”.