The Lambs had to make changes to their starting line-up, with Dan Evans and Lewis Daw through injury, Josh Robins and Tyler Elliot both serving a suspensions, so in came young Hayden Greening at centre back, with Luke Brown going to left back.
The hard fought tie was played in very difficult playing condition with a very strong wind gusting to gale force at times.
The game got off to a fast start with both teams probing for an opening. It was the home team that had the first effort on target, when Josh Oak was called on to make a smart save to deny O’ Conner from scoring. The Lambs responded when a fine run down the left by Jack Crago, his cross into the penalty area found Josh Grant, but he sliced his shot over the bar from twelve yards.
The game continued to flow from end to end, with Emmett going close for the hosts, before Josh Grant saw his header from a corner kick flash inches wide of the target.
The Lambs got the opening goal in the 23rd minute when a fine defence splitting pass by Burns resulted in Liam Prynn outpacing his marker, before rounding the keeper and slotted the ball home. 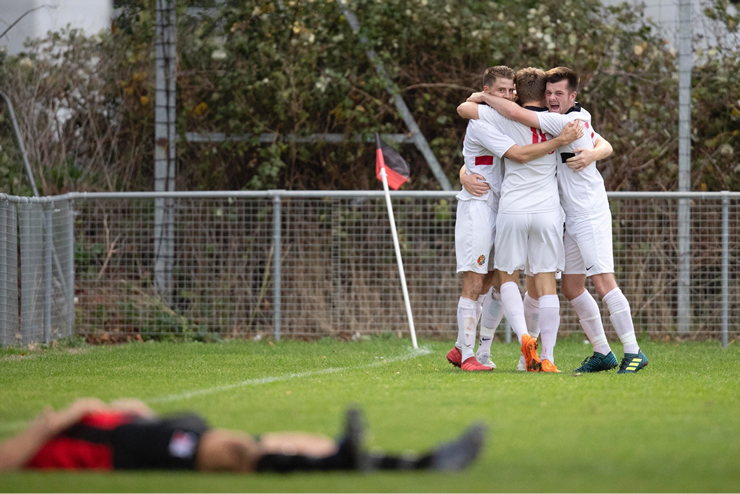 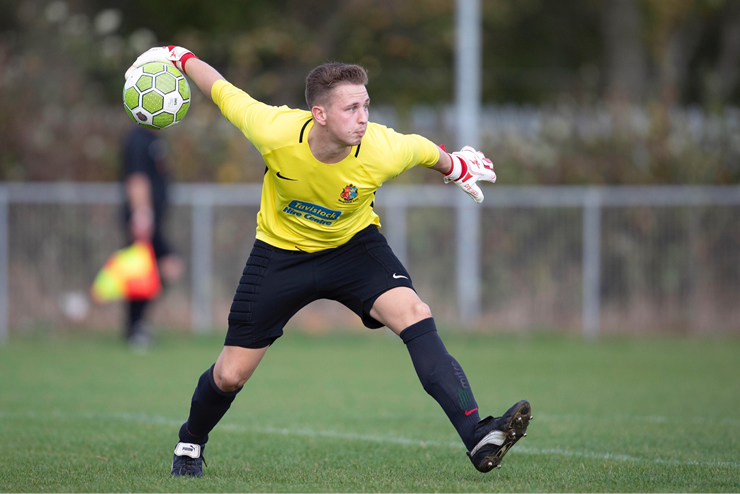 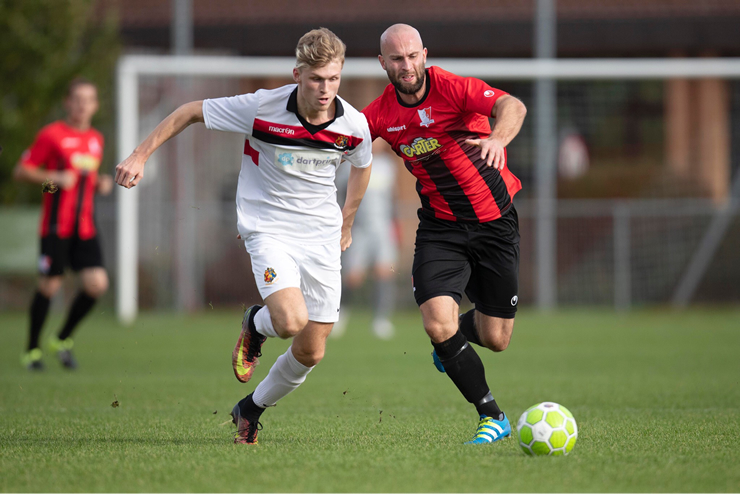 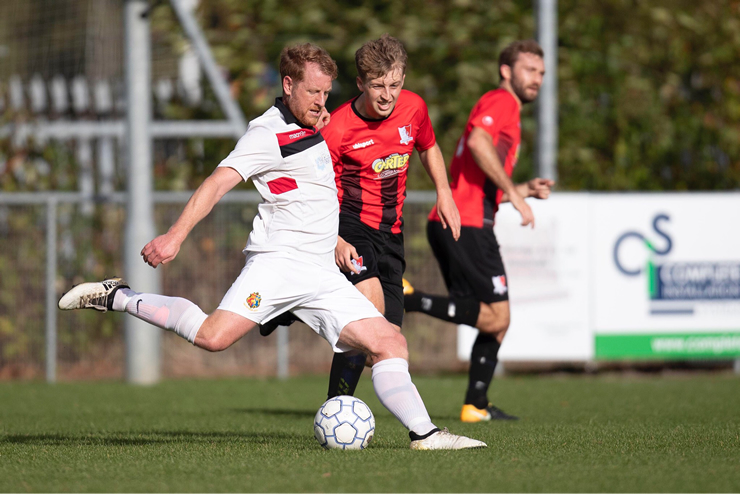 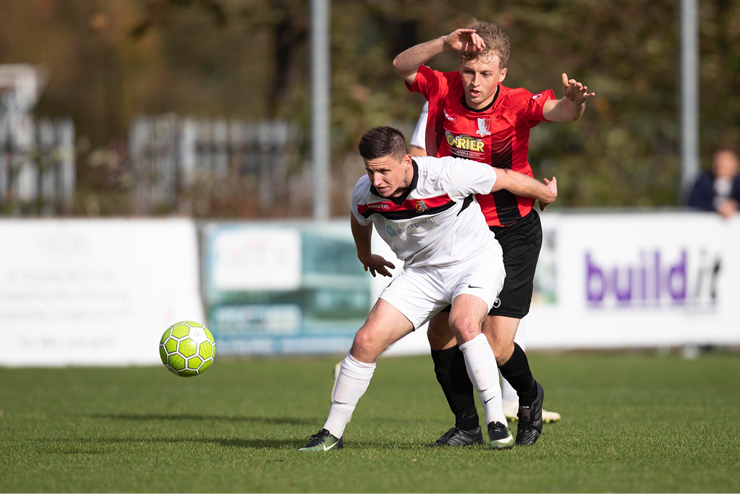 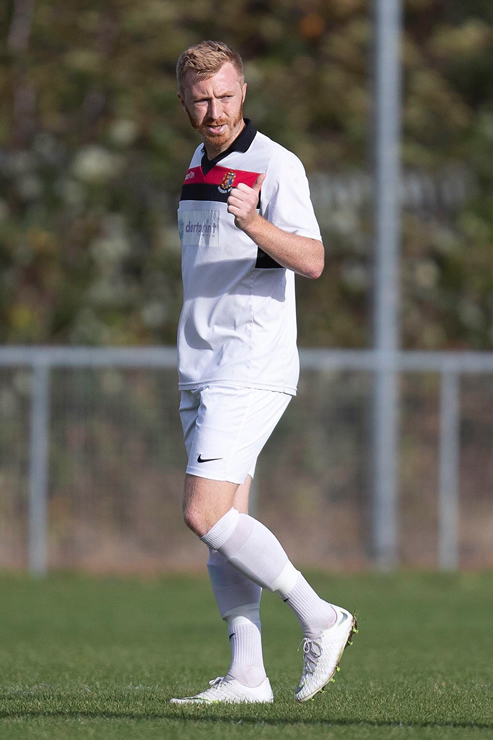 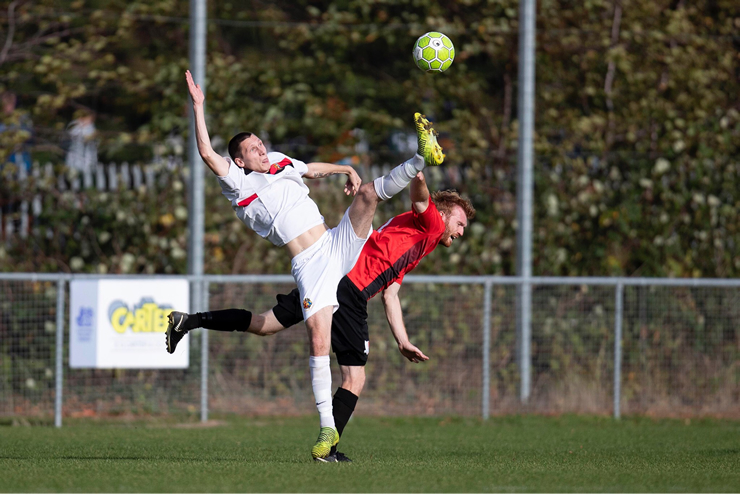 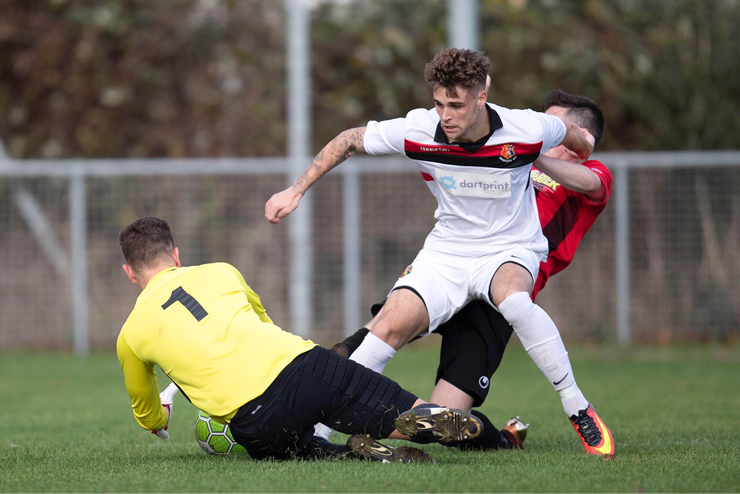 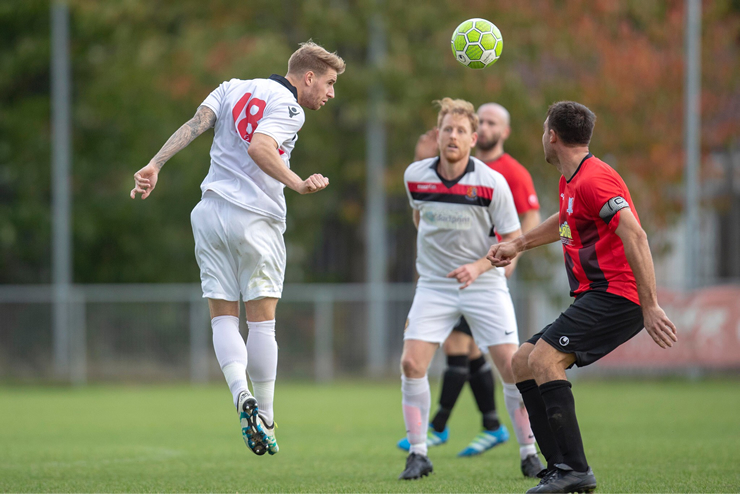 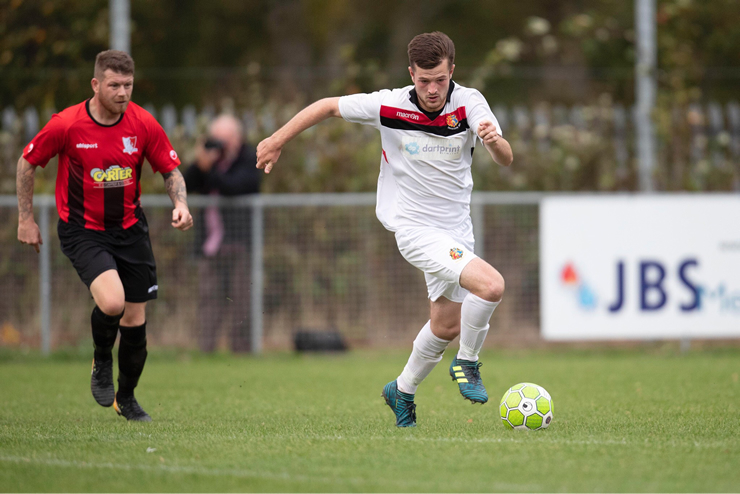 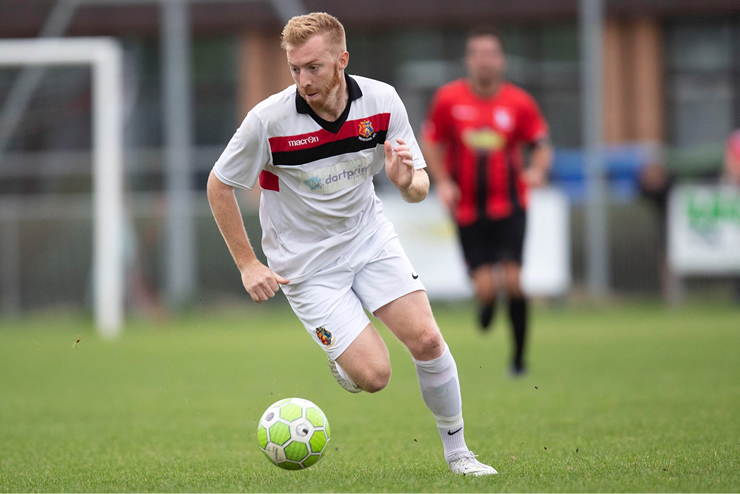 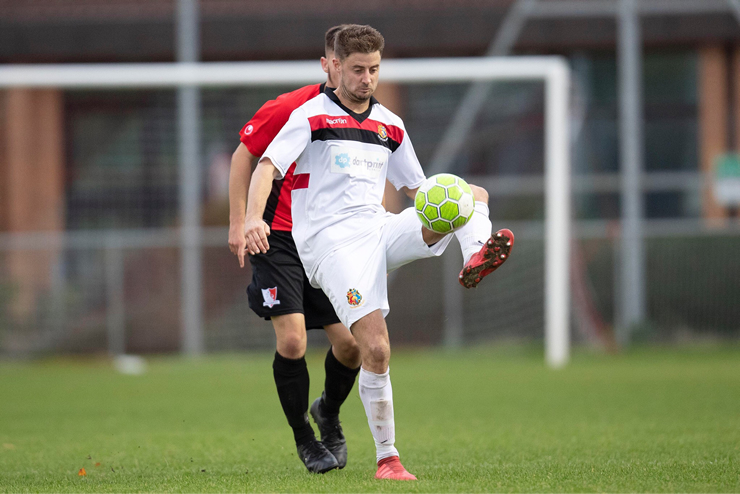 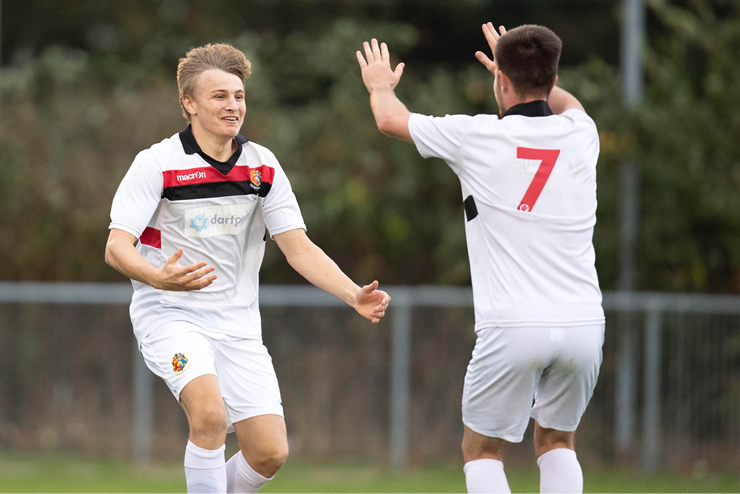 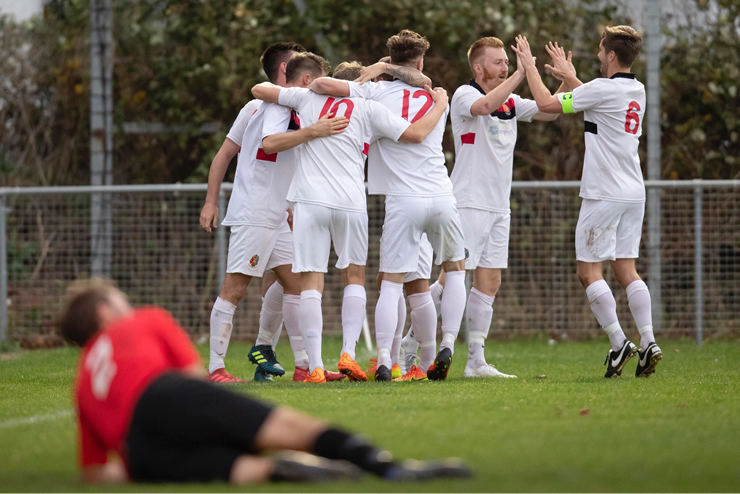 The Lambs lead lasted for two minutes as the home team produced a fine passing move by Emmett and Martin, provide the opportunity for Campbell to fire home from twelve yards.
In the twenty fifth minute, Lambs Reece Shanley was carried off after being injured in a tackle, Riddle immediately took his place.
Both teams strived to play good football in the very difficult conditions, but failed to create any real good scoring opportunities so the score line remained level at the interval.
Manager Stuart Henderson must have had a few words during the break as the Lambs started the second half at a much higher tempo and spurned a golden opportunity to regain the lead in the opening minute with a great break down the left by Jack Crago, his cross into the penalty area saw Liam Prynn slice his shot over the bar from six yards.
They then created two further good scoring opportunities, Tallan Burns saw his terrific effort go inches wide of the target, before the same player made a fine run and cross into the six yard area which was inches out of the reach of the on rushing Jack Crago.
Having failed to convert these chance the home began to get back in the game and keeper Josh Oak had to make a splendid save to deny Turner from giving them the lead.
Josh Grant was denied by home keeper Wintle, shortly afterwards in the 87th minute a good move saw Tallan Burns make a penetrating run, gliding past two defenders, his fierce shot cannoned back off the post and rolled to safety.
The home team then almost snatched victory in time added on when a great cross from Welch, into the penalty area, but Emmett shot wide of the target.
The game went into extra time, with Manager Henderson making a substitution mid-way through the first period when Bailey Williams replaced Jack Crago. The Lambs were now getting on top, when Liam Prynn went agonisingly close as his shot was palmed away for a corner kick.
The second period of extra time resulted in the Lambs sealing victory. The first goal came when Bailey Williams played a great ball to Tallan Burns on the left flank, his fine run and cross into the six yard box was fired home by Liam Prynn.
A very similar move with Bailey William providing another fine pass put Liam Prynn in on goal, his fine effort was blocked, but the ball rebounded back into his path, which he finished off with aplomb, to seal a hard earned deserved victory.
This was a very competitive cup tie between two good teams that produced some entertaining football in very difficult windy playing conditions. The Lambs were slightly the better side during the tie but Longlevens were always a threat, making it an exciting cup tie.
This was another good all round team performance, with the whole team putting in a fine shift. Young Hayden Greening had a really good game in the centre of defence alongside Warren Daw. Dave Hallett was once again superb in midfield. Tallan Burns always looked a threat with his penetrating runs, but it was Liam Prynn who was man of the match with his fine hat trick to seal the victory.
This Friday evening the First Team are Home to Plymouth Argyle in the Walter Parsons League Cup. Kick Off. 7-30pm.
On Saturday the Reserves are Away to Launceston. Kick Off. 2-30pm.