IT was hastily arranged and played within 24 hours of being agreed, but Tavistock and Plymouth Parkway served up an entertaining 1-1 draw at Langsford Park on Wednesday night.

The two clubs have become great rivals in recent seasons, with Parkway moving up from the South West Peninsula League to the Southern League Division One, where they will play this coming season.

For much of that time, Tavi have been hard on their coat tails and despite finishing second in the Western League’s  average points per game table over the last two seasons, they were rejected the chance of upward movement over the summer.

Both clubs have aspirations to go further and the hope is that such disappointment is only a bump in the road for Stuart Henderson’s Lambs, who showed they are every bit as competitive against Parkway in this entertaining draw.

Parkway created the better chances in the first half, but it was Tallan Burns that opened the scoring for Tavi with a neat finish after combining well down the right with Ben Cross. However, Mikey Williams capitalised on a mistake by Tavi’s Calum Davenport to set up Tom Bath, who smashed the equaliser six minutes after the break. 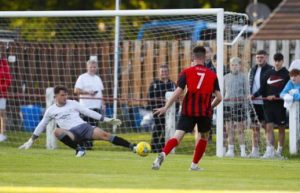 “Although it was a friendly game against our neighbours, the fact we have been in the same league for the last three or four years meant there was always that competitive edge to it and I thought it was,” Henderson said.

“It was two evenly-matched sides, I thought we edged the first half and it was a good goal by Tallan, he took it well and we were maybe unlucky not to get another one.

“Their goal obviously came from a mistake from Calum (Davenport) but I understand that was his first game in 18, 19 months, but I thought he was excellent.

“Iestyn (Harris) came on after 60 minutes and I thought he was fantastic, he really linked it and I think he could be a real find, so a good work out, a good game, they obviously had a few lads out but so did we with no (Josh) Grant, Teigan (Rosenquest), Alex (Cairo) Lewi (Daw) and Dan (Evans) is probably not going to be back until September.

“They haven’t played much in pre-season and they probably won’t make the start of the season because it is only just over two weeks away now.”

As Henderson said, both teams were missing players with some injured and others in isolation, something which is a growing concern as we head ever closer to the start of the season.

For Tavistock, that starts on July 31 at Saltash, while Parkway must wait until August 14 before their maiden campaign in the Southern League Division One South begins.

As yet, they are still waiting to hear who that will be against, but the fixtures for the new campaign are being released at 1pm this afternoon.

There was one familiar face in the Parkway ranks, though, with former Lambs favourite Jack Crago returning to Langsford Park for the first time since his summer move down the A386.

“It was tough,” Crago said on his return. “We knew it was going to be a tough game, they are physical and hey pass the ball around well, but it is another 90 minutes in the legs and we keep going.

“It’s been a strange pre-season, though. We were supposed to play Dobwalls, they’ve had problems, we have had problems and games are being called off left right and centre at the moment, but it was good to get 90 minutes in and get another game in.”

Making the switch from Langsford Park in the summer was certainly a tough decision for Crago, who had been such a key player for the Lambs in recent years. “It was, definitely,” he said.

“I was here for ten years and the club will always be close to my heart. Hopefully they have an amazing season and we have a good season as well.”